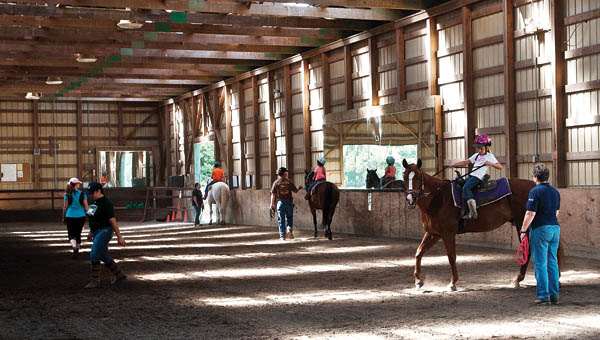 FRANKLIN FURNACE — With a cluck of the tongue and a couple of well-paced kicks from his brown cowboy boots, Nate Morris squeezed Zula, the Swedish warm blood, into a rollicking trot.

His stoic expression belied the reality that as far as he was concerned there was no better way to spend a Wednesday morning than perched on top of the big gray at the Ohio Horse Park.

“It is so much fun,” Nate said at the end of his lesson on the third day of horse camp. “Trotting feels a lot smoother than walking.”

This was the second year for Nate of Athens, who spends part of his summer with his grandparents in South Point, to be part of the camp, one of the learning experiences in Ohio University Southern’s Academy of Excellence.

“I like horses and all the staff are great,” the 12-year-old said. “I love spending time with horses.”

Introducing children to the equine world is the purpose of the weeklong camp at the OUS Horse Park in Franklin Furnace.

There they learn not just how to sit the basic gaits of the animal but also how to care for it.

“They learn everything they can about horses,” Charlene Halkiu, instructor and program assistant, said. “How to brush the horse. How to saddle the horse. What the five brushes are to groom a horse. We strive to produce independent riders.”

In the ring Halkiu encouraged the youngsters as they learned how to push their horse from one spot on the rail to another. Sometimes they were on lead lines guided by camp assistants and other times they move on their own horsepower.

Setting up construction cones in the center of the arena, Halkiu led the riders around in a Figure 8, watching their hands to make sure they weren’t bouncing their horses’ mouths.

“Now what is another shape we can ride our horses in,” Halkiu asked.

Sophie Warner of Huntington had the answer.

So each rider pulled the inside rein tight against the horse’s neck while pulling the other rein out to the center of the arena forcing the animal to make a tiny ring.

As the lesson wound down, each assistant stayed close to the riders to help them swing their feet out of the stirrups and slip off. Then it was back to grabbing the grooming boxes and brushing their charges down.

Since she became teaching the camp, Halkiu has watched her students blossom in more ways than just fledgling equestriennes.

“This can affect their social skills, their independence, develop leadership,” she said. “Even learning the five grooming brushes and remembering the sequence they’re used develops memory retention. It’s a bonding experience to take care of their own animals for a week. They develop a relationship with the horse and an empathy. They’re happy to be here.”

An Ironton teen will spend the first few years of his adult life behind bars after he admitted to evading... read more