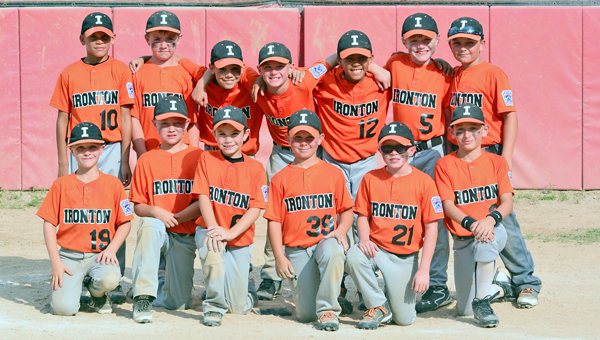 The little guys put up some big numbers.

“It was a great atmosphere and our kids really played well and enjoyed themselves,” said Ironton coach Travis Wylie.

Boy, did they play well.

The state tournament consisted of two pool play games that determined the seeding for a single elimination tournament.

In the single elimination round, Ironton topped tournament host Rock Hill 13-0. Ian Ginger and Wylie were 3-3 to lead the offense. Owen Johnson, Harvey and Daniels were 2-2.

Next Ironton played Lakewood again and breezed to an 11-2 win. Sheridan, Daniels and Schreck were all 3-3 with Owen Johnson and Roach 2-2.

Ironton led 3-2 in the fourth inning when Brady Moatz ran down the first base line and collided with the first baseman who dropped the ball. However, Moatz was called out for interference and the play incited Ironton as the all-stars scored three runs in the inning and five more in the fifth inning to seal the win.

The 7-8-year-old tournament uses a pitching machine and teams are only allowed to score as many as five runs in an inning over the first five innings. The run total is unlimited in the sixth inning.

In the state championship game, Ironton fell behind 4-0 in the top of the first inning to Wheelersburg but came back to score five runs in the bottom of the inning and did not make an out.

Wheelersburg went up 6-5 in the top of the third only to have Ironton answer with five runs in the bottom of the inning, again without making an out.

Leading 10-6 in the fourth, Ironton got a run and Wheelersburg managed a run in the sixth and the game ended with Ironton coming away as an 11-7 winner and state champions.

Freeman went 3-3 with Wylie, Moatz, Daniels and Owen Johnson all 2-2.