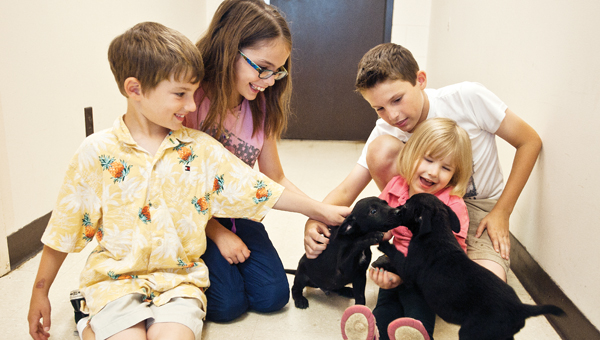 Siblings Ronan, Maia, Malcolm and Madeleine McCown bond with their new puppy when another puppy comes running out during a pet adoption event at the Lawrence County Animal Shelter on Saturday.

Ben McCown came down from Westerville to spend some time with his parents in Ironton and ended up adding to his family back home.

That’s because before McCown headed back to Columbus, he and his wife and children stopped by the county animal shelter to take home a black Lab mixed puppy.

“It’s the whole idea of rescue and saving something and not spending lots of money to get a pure breed,” McCown said. “I like the idea of getting a mixed breed.”

On Saturday from noon to 5 p.m. the animal shelter’s doors were open for a special pet adoption.

Fuhr was one of the founding members of the volunteer group that has promoted rescuing the animals that come into the shelter.

Sisters Cara DePriest and Stephanie DePriest of Pedro left the shelter with tawny stripped Hemingway cats or cats with extra toes. The technical name for the cats is polydactyl.

But they derive their nickname because Nobel Prize winning author Ernest Hemingway so adored those cats that when he died his home became a museum and home for those cats. Currently the house is home to 50 descendants of Hemingway’s original cats.

Cara plans to call her cat Mariah, but Stephanie wasn’t sure about her name yet.

Adoption at the shelter costs $30 for dogs and $6 for dog tags and $15 for cats. Adopters also get a paper they can take to the county humane society for a voucher for a free spay or neuter. There are no applications required to adopt a pet.

These and many other animals will be available at the Lawrence County Dog Shelter for an adoption event starting at... read more