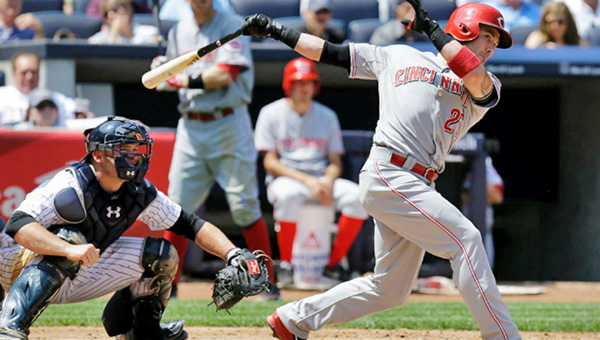 NEW YORK (AP) — A miserable weekend for the Cincinnati Reds ended with an embarrassing gaffe.

Jacoby Ellsbury got four hits and scored the winning run in the ninth inning on Brian McCann’s pop-fly single that dropped near three Reds in shallow right field, giving the New York Yankees a 3-2 victory Sunday.

“I do not think anybody really wants to talk about it at this exact moment,” manager Bryan Price said. “Unfortunate way to lose a game.”

Ellsbury and Derek Jeter each had an RBI single in the fifth for the Yankees, who finished a three-game sweep in the first series after the All-Star break. Hiroki Kuroda outpitched Cincinnati ace Johnny Cueto and left with a 2-1 lead before Todd Frazier’s tying homer off Dellin Betances in the eighth.

Ellsbury also stole two bases and made a sliding catch in center field that saved a run. He reached safely all five times up, including a leadoff single in the ninth against Aroldis Chapman (0-3).

Before that, left-handed hitters had been 1 for 18 with 12 strikeouts against the hard-throwing Cuban this season.

Ellsbury got a great jump and swiped second without a throw. He reached third on a wild pitch before Chapman struck out Mark Teixeira with a 101 mph fastball.

McCann, another left-handed batter, lifted a popup that barely reached the outfield grass behind first base. But with the infield playing in, Frazier and second baseman Skip Schumaker scurried back trying to get under the ball as Jay Bruce rushed in from right field.

All three appeared to have a hard time finding it in the air, however, and the ball landed untouched. Ellsbury dashed home easily as McCann stood on first base with his arms raised.

“Certainly I think that it was a miscommunication in the sense that, I am sure Jay and Schumaker both thought the other was going to catch the ball,” Price said.

Chapman stared out toward shallow right field, where Frazier, Schumaker and Bruce were practically frozen in disbelief.

“Just one of those things — I thought I was under it and I was not,” Frazier said. “By the time the ball was coming down it was already too late. … I should have caught it.”

Center fielder Billy Hamilton had trouble with the sun earlier, allowing Ellsbury’s seventh-inning fly to fall for a double.

David Robertson (1-2) pitched a perfect ninth. It was New York’s second walk-off win this season and the fifth game-ending hit for McCann — his first since a home run for Atlanta against Houston on May 17, 2011.

“I’ll take it, for sure,” McCann said with a laugh. “I saw that everybody was looking at each other. So there was a chance, and luckily for us it fell.”

After losing their sixth straight road game, a season high, the Reds are 2-5 without injured sluggers Joey Votto and Brandon Phillips.

The 39-year-old Kuroda gave up three hits and no earned runs over 6 2-3 innings. Cueto threw 112 pitches in five innings, matching his shortest start of the season.

“I felt really strong today,” he said through a translator. “I would have kept going even with the amount of pitches I had.”

Frazier won a matchup of All-Stars when he lofted Betances’ full-count pitch into the left-field corner, just beyond the 318-foot sign.

It was the first home run at Yankee Stadium for Frazier, who grew up about 85 miles away in Toms River, New Jersey. He pumped his fists at home plate and received hearty high-fives in the dugout.

Betances has allowed two homers in 58 1-3 innings this season.

He singled to start the inning and, with Frazier at the plate, took off trying to steal second before Betances began his delivery. The big right-hander stepped off the rubber, and Schumaker was tagged out after a long rundown.

Schumaker, just off the seven-day concussion disabled list, had an RBI double with two outs in the fifth. That was Cincinnati’s only hit in 22 at-bats with runners in scoring position during the series.

“They just outplayed us,” Price said. “Some of the things that happened in the series (were) unfortunate.”

NOTES: Reds general manager Walt Jocketty said he would like to add a bat before the July 31 trade deadline. His preference would be someone who can play multiple positions. “Eventually we’re going to get Joey and Brandon back, so you don’t want to limit yourself,” Jocketty said. … Frazier, an All-Star third baseman this season, made his eighth start of the year at first and robbed Teixeira of a first-inning hit with a diving stop at the bag. … Cincinnati is 3-8 in interleague games. … Schumaker is 8 for 21 (.381) against Kuroda. … RHP Mat Latos (2-1, 2.79 ERA) starts Monday night in Milwaukee against RHP Wily Peralta (10-6, 3.72). Latos left his most recent outing July 11 against Pittsburgh with lower back spasms. … Cincinnati has won all three series against the Brewers this season. … INF Jack Hannahan (right shoulder surgery) went hitless in his first 10 at-bats after his rehab assignment was transferred to Triple-A Louisville.