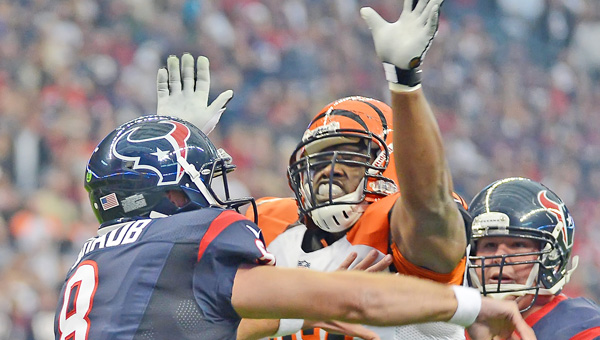 Geno Atkins (97) of the Cincinnati Bengals pressures Matt Schaub (8) of the Houston Texans. Atkins was placed on the physically unable to perform list Monday along with cornerback Leon Hall and seven other players. (MCT Direct Photo)

Atkins missed seven games and the Bengals’ one playoff game last season after undergoing surgery on his right knee. He was injured on Oct. 31 at Miami and was not expected to be ready for the start of training camp.

Hall tore his right Achilles tendon on Oct. 20. It was his second such injury in three years.

Atkins and Hall, who started only five times last season, are eligible to come off that list anytime during the preseason. They count against the team’s 90-man roster limit.

Punter Kevin Huber also was placed on PUP with a neck problem. Other veterans on the list were guard Clint Boling (knee); linebacker Marquis Flowers (hamstring); receivers Ryan Whalen and Colin Lockett, both with hamstring injuries; defensive tackles Devon Still and Zach Minter, both with back problems.