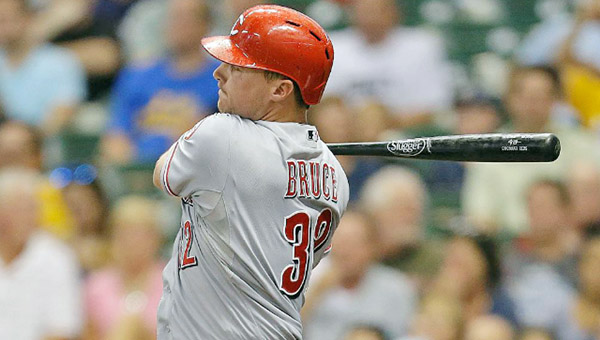 Cincinnati Reds’ outfielder Jay Bruce doubled home a run in the fourth inning of Tuesday’s game against the Milwaukee Brewers. The Reds tied game at 3-3 only to lose 4-3 in the ninth inning on a home run by Jonathan Lucroy, his second solo shot of the game. (Courtesy of The Cincinnati Reds.com)

Unfortunately for the Reds, four were home runs and that was enough to keep Cincinnati winless since the All-Star break.

Jonathan Lucroy homered leading off the bottom of the ninth to give the Brewers a 4-3 victory.

“”It was just kind of a weird game, losing on four solo shots,” Cincinnati starter Homer Bailey said. “What did they have, six hits? What can you do?”

Lucroy homered off Bailey in the sixth inning.

Ryan Braun and Aramis Ramirez hit back-to-back homers in the first inning on the one-year anniversary of the start of Braun’s 65-game suspension for violating Major League Baseball’s drug policies.

“The pitches, the ones that I gave up, I thought were pretty damn decent pitches, they were just a little bottom of the zone, caught maybe a little bit of the plate more than I wanted,” Bailey said.

“But out-of-the-zone pitches, they went out there and got them,” he said. “This park, the ball flies a little bit once it gets up in the air.”

It was Lucroy’s second career walkoff homer and both were against the Reds. His first was last season off closer Aroldis Chapman and this one was off Sam LeCure.

Francisco Rodriguez (4-3) pitched the ninth to earn the victory.

Cincinnati, which is 0-5 since the All-Star break, had five hits, four singles and an RBI double by Jay Bruce.

Reds manager Bryan Price brought in LeCure (1-2) to pitch the ninth. His outing lasted just three pitches as Lucroy hit a 1-1 offering for a line drive homer inside the left field foul pole.

“Let’s forget the silver lining tonight,” Price said. “We gave up four home runs and lost 4-3. And just haven’t played terribly well coming out of the break. And not a whole lot else to say other than that.”

The Reds won seven of nine games to pull within 1 1/2 games of Milwaukee at the All-Star break but have quickly fallen 4 1/2 back.

“Just haven’t played terribly well, haven’t gone out there and won ourselves a ballgame, haven’t really done enough to go out there and win,” Price said. “And we’ve got to step it up.”

“To be honest with you, the last couple of weeks have been kind of tough for making solid contact, but I’m glad to help the team out, contribute and get it done tonight,” Lucroy said.

Braun hit his 13th homer and Ramirez followed with his 12th homer, and first since June 26.

Cincinnati made it 2-1 in the fourth on Bruce’s RBI double that scored Billy Hamilton from third.

Cincinnati tied it 3-3 in the seventh. Milwaukee starter Jimmy Nelson hit Ramon Santiago on the foot with a pitch with the bases loaded and pinch-hitter Chris Heisey hit a sacrifice fly off reliever Brandon Kintzler.

Hamilton then hit a soft fly ball but Zack Cozart was doubled off second base to end the inning.

Nelson allowed three runs, four hits and a walk and hit three batters while striking out five in his fourth major league start.

Bailey allowed three runs, four hits and two walks while striking out three in his first start since leaving a game against the Chicago Cubs on July 10 due to right knee soreness.

NOTES: Cozart left the game in the seventh after being struck on his right hand while attempting to bunt. X-rays were negative and the team said he was day-to-day. … The Reds placed RHP Logan Ondrusek on the 15-day DL retroactive to July 13 and recalled RHP Curtis Partch from Triple-A Louisville. … A brief rain shower caused the Brewers to close roof at Miller Park in the fourth inning. It reopened in the sixth.

CINCINNATI (AP) — The Bengals expect cornerback Leon Hall to be ready for the start of training camp and defensive... read more