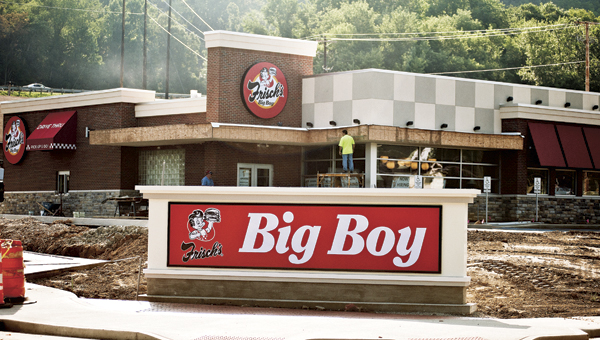 THE TRIBUNE/JESSICA ST JAMES
With an opening date of Aug. 11 drawing near, work continues on the Frisch’s Big Boy on South Ninth Street.

People seeking refuge from the Dog Days of summer can escape to the air-conditioned confines of Frisch’s Big Boy on Ninth Street in Ironton beginning at 6:30 a.m. on Aug. 11. As the winter months approach, a warm room at the Holiday Inn Express and Suites will be also at their disposal.

Both businesses are part of phase 1 of the Gateway Project, which is part of the ongoing downtown revitalization efforts in Ironton.

Ironton businessman and project investor Jim Kratzenburg said he is glad to have a set date for opening after a long, harsh winter caused multiple construction delays.

“I am happy with the way things are going and happy we will be opening,” he said. “The weather has been cooperative, the workers have their punch lists and we are excited and ready to go.”

Frisch’s has hired several employees for the restaurant and Kratzenburg said people are still being hired on a daily basis. The 5,500 square foot 172-seat restaurant is modeled after the company’s largest schematic and was originally set to open in early June.

Chief Executive Officer of MPH Hotels Michael Holtz said on Tuesday he plans for the 79-room Holiday Inn Express and Suites to open in late October or early November.

“I will be in Ironton later in the week to take a look at the progress,” he said. “I’ll know more of an exact opening date after I visit the site.”

MPH has constructed more than 150 hotels in the United States. Upon completion of the Holiday Inn in Ironton and an Athens Fairfield Inn MPH will operate seven hotels in Ohio.

Approximately two acres were transferred for construction of the hotel and restaurant. The county port authority retained ownership of the remaining acreage.

CHESAPEAKE — Replacing the sidewalk in front of St. Ann’s Church on Third Avenue in Chesapeake is the second phase... read more