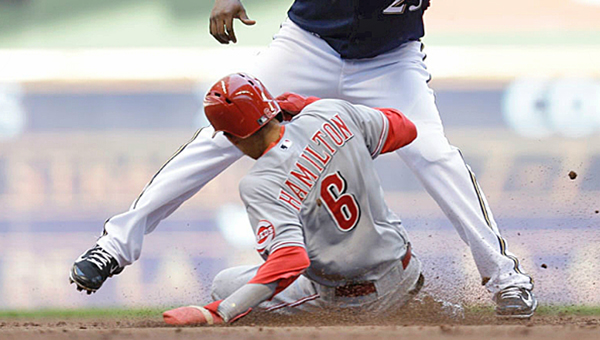 Cincinnati Reds’ Billy Hamilton (6) steals second base during the third inning of Wednesday’s game against the Milwaukee Brewers. The Reds lost their sixth straight adn fell five and one-half games behind the Brewers who won 5-1. (Courtesy of The Cincinnati Reds.com)

MILWAUKEE (AP) — After another tough loss for the Reds, Cincinnati manager Bryan Price still believes in his team.

Mark Reynolds homered twice to help the Milwaukee Brewers sweep the three-game series from the Reds with a 5-1 win on Wednesday.

Kyle Lohse pitched 6 2-3 strong innings to hand the Reds their a season-worst sixth straight loss since the All-Star break.

“Anybody that watches our six games on this road trip would understand that we’re not playing as we were leading into the break,” Price said. “We’re not scoring a lot of runs. We’re not getting terribly efficient starting pitching. We know that we’re a better club than we’ve represented here in the last six games.”

The then surging Reds trailed the NL Central-leading Brewers by 1 1/2 games before the All-Star break, but the loss dropped them 5 1-2 games behind.

“I think that our guys are capable of turning it around,” Price said. “We’re definitely going to start to pitch better and definitely are more than capable of scoring enough runs to win games.”

Cincinnati have scored 12 runs during the losing streak.

Brewers manager Ron Roenicke knows the Brewers had a better chance of winning without two key Reds in the lineup.

The Reds are missing Joey Votto (left knee) and Brandon Phillips (left thumb), who are on the disabled list.

“There’s still some guys in their lineup we have to worry about, but when you take out the two guys, those guys do a lot of damage against us,” Roenicke said.

“We’re all trying hard, but we’ve got of our best players, if not our two best players that are rehabbing right now,” Leake said.

Reynolds connected on a 1-1 pitch from Leake (7-9) for his 15th home run of the season. Rickie Weeks was on with a double to start the sixth.

Lohse and Leake were scoreless until the fifth inning.

The Reds pushed across a run on Billy Hamilton’ sacrifice fly, but the Brewers tied it with a run scoring triple from Carlos Gomez and then took the lead when Gomez scored on Ryan Braun’s infield single.

Brewers reliever Jeremy Jeffress, whose contract was selected from Triple-A Nashville, made his debut for Milwaukee with a 1-2-3 ninth inning.

NOTES: Reds SS Zack Cozart missed the game. He left Tuesday’s game after he was hit by a pitch on the first two fingers on his right hand. Manager Bryan Price said he could pinch hit. . Hamilton’s sacrifice fly in the top of the fifth was his sixth which ties him for third on the NL leaders’ list. . Alfredo Simon (12-4) starts Friday when the Reds take on the Washington Nationals in Cincinnati. Thursday, the Brewers Matt Garza (6-7) faces the New York Mets Dillon Gee (4-2).

BEREA (AP) — Justin Gilbert’s got his contract with the Browns. Now he needs a starting job. The rookie cornerback... read more