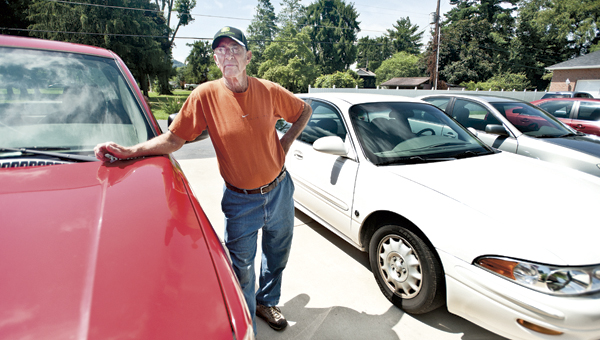 THE TRIBUNE/JESSICA ST JAMES
Rome Township resident Herman Perry stands between vehicles at his home. During the past few weeks, Perry and his neighbors encountered an ash-like substance that is destroying the paint on vehicles, furniture, outdoor appliances and even metal siding.

ROME TOWNSHIP — A mysterious ash like substance found on cars and homes in one Rome Township neighborhood is now being investigated by the Ohio Environmental Protection Agency.

Two weeks ago, Herman Perry, who lives on Holiday Drive, awoke to find the substance all over his red work truck. At first, Perry thought it may have been ash caused by a neighbor burning brush, but he soon realized it was something else entirely.

“My truck was covered in it,” Perry said. “I just thought my neighbor had burnt some brush and I wiped off the ash. But, I couldn’t wipe it all the way off and later I noticed it had started to eat away at the paint.”

Perry then inspected his wife and daughter’s vehicles and discovered the substance was doing the same thing to their automobiles. After walking through the neighborhood and talking to his neighbors, Perry said he realized how serious the situation was.

“About 16 cars in our neighborhood alone are damaged from this stuff,” Perry said. “Some of them are more damaged than mine are, plus it is doing the same thing to a couple of homes that have vinyl siding.”

Perry called and logged several complaints with the Ohio EPA and the state agency has agreed to do an investigation.

“We’ve heard from Mr. Perry about his concerns,” Heather Lauer, media relations coordinator for the Ohio EPA said. “And we are going to look into it and conduct an investigation.”

The impact the mysterious substance has on food and water is Perry’s biggest concern.

“It’s bad that it is eating up the paint on our automobiles,” he said. “But, it has also destroyed the plants in my garden. It’s eating them up too and I’m afraid to eat my crops. Also several people in the area have swimming pools. It can’t be good for the water either.”