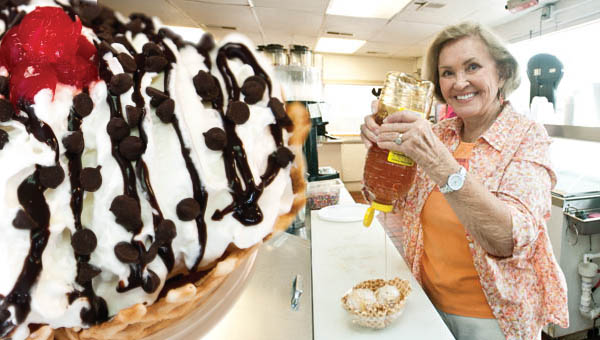 “I love to make ice cream,” Joyce Snyder, owner of Austin’s Homemade Ice Cream, said. “That is what makes this so successful.”

It’s an overcast Tuesday in May, just about 11 a.m. Not the kind of day that seems to scream ice cream. But that’s not the case at Austin’s in Ceredo, W.Va.

Already the line is forming at the window of the bungalow that has proffered scoop after scoop of homemade ice cream since 1947.

A man in work clothes gets out of a truck that promotes the best plumber in the Tri-State with one simple request.

“I want a banana split with everything on it,” he tells the young woman who has come to the window.

And a banana split with three double scoops, whipped cream, nuts and cherries is what he takes over to a bench by the floodwall and obviously digs in with enjoyment.

The lady who for the past 31 years has made Austin’s Austin’s is enjoying an hour or two away from the business in her apartment upstairs with its non-stop views of the Wayne County woods.

After all, she spent most of the day before making gallon after gallon of butter pecan, pina colada, Snickers, blueberry cheesecake, along with the requisite vanilla, chocolate and strawberry.

“I love to make ice cream,” Joyce Snyder, owner of Austin’s Homemade Ice Cream, said. “That is what makes this so successful.”

Snyder bought Austin’s in 1983 after spending 20 years in the banking business. At one point in her life she had worked at a Dairy Queen in her hometown of Catlettsburg, Ky. Coincidently she wanted to get back in the ice cream business when she heard Austin’s was for sale.

“I’m the longest that anyone has owned it,” she said.

That Austin’s featured only 13 flavors, more than the usual number of flavors for dairy places pushing soft serve cones. But that still wasn’t enough for the ambitious Snyder who donned an apron and started grabbing flavors and fresh fruits and liquors and let her imagination lead the way.

“I experimented a lot,” she said. “A lot of the stuff is hit and miss and some I have to throw away. But I have quadrupled the business since I bought it.”

What she didn’t have to throw away have become her trademark hits, like her butter pecan.

“It has pails of butter pecan syrup with baked butter pecans,” Snyder said. “I’ve had third generations come and ask for it. It is just a tradition. In everything I use all natural ingredients. That is why it is so successful.”

A little more modern is the coffee ice cream dripping with Kahlua liquor sprinkled with the toffee goodness of crushed Heath candy bars.

“With the pina colada, I just experimented,” Snyder said.

The most successful experiment turned into the flavor that has her most fans — her grape pineapple.

“They come from all around to get my grape pineapple,” she said.

Snyder typically takes three or four days a week to replenish her inventory by churning up 300 to 400 gallons a week of whichever of the 32 flavors she offers she needs at that time.

First she puts the ingredients into an industrial ice cream maker that churns out the confection at 18 degrees. Next that is put into a flash freezer that takes eight hours to harden it to 35 degrees below zero. Then the ice cream goes into a walk-in freezer that brings it up to scoopable consistency.

Besides cones and cups of the sweet cold stuff, Austin’s offers specialty ice cream treats like a turtle sundae made of vanilla ice cream with hot fudge, caramel and butter pecans. Or the cinnamon taco sundae where cinnamon ice cream is covered with honey, chocolate syrup and chocolate chips.

“I got that idea from a Mexican restaurant,” Snyder said.

Usually by the middle of March Snyder comes back from Florida to open up Austin’s for the spring, summer and fall that runs from April 1 to mid-October. Motorists driving down Route 60 in front of the shop watch for the sign outside the building to announce the opening.

Fans are so loyal that not only do they come back year after year, their children and grandchildren become Austin’s devotees.

“I had a lady tell me that her son is named Austin,” Snyder said.

That devotion to the Tri-State’s premier ice cream parlor is what gives Snyder her satisfaction.

“It is fun to get to make people happy, especially the kids,” Snyder said. “They get excited. They get so happy.”

And it’s a loyalty Snyder intends to repay. Although she’s not sure when she’s going to retire, her son is set to take over the store. And after him, her grandchildren will take over the ice-cream making.

“There will always be an Austin’s,” she said.

Mickey Fisher is a screenwriter and Ironton native who has come a long way from the stages atWest Ironton Elementary... read more