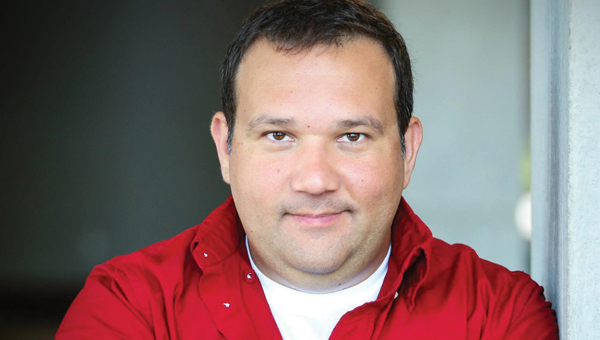 Mickey Fisher is a screenwriter and Ironton native who has come a long way from the stages at
West Ironton Elementary and the Paramount. Fisher penned “Extant,” a 13-episode futuristic thriller on CBS.

You have said your creative DNA was programmed by Steven Spielberg movies such as E.T. What’s it like working with him now?

Working with Mr. Spielberg is everything you dream it would be. It really makes you want to up your game because you’re sitting across from, or on the phone with, the guy who made some of the biggest movies of all time. He’s always insightful about what the audience is feeling in the moment and conscious of the ride we’re taking them on.  Working with him reminds me of a quote I once heard, I think by Miles Davis, that a good musician can play anything he can think. The difference between a good musician and a great musician is what he thinks.

How much do your experiences from growing up in Ironton influence your writing?

My experiences from growing up in Ironton influence my writing every day.  One of my favorite song lyrics is from Joni Mitchell’s “A Case of You” where she says, “I remember that time you told me love was touching souls, surely you touched mine, cause part of you pours out of me in these lines from time to time.” I feel like the people and the places that formed me pour out in lines all the time. The themes I’m interested in, ideas of family, friendship, love and self-sacrifice, are all things that were ingrained in me from growing up there and from my family.

What are your goals for five, 10 years from now?

My goal five years from now is the same as it was 15 years ago when I sat down and wrote out a vision of where I ultimately want to end up. I’d like to have the freedom to move between TV, film and theater as a writer and to tell the stories that are unique and personal to me.

If you weren’t screenwriting, what would you be doing?

I don’t know what I’d be doing if I wasn’t writing or creating. I really don’t have any other skills. I love working with kids but I do it for very short periods of time. Before I had this dream job with the show I had another dream job: riding a Can-Am Spyder all over the country, meeting people, writing articles and shooting videos. I could have done that for a long time, too.

In the two years since Suplex Tacos opened, the small restaurant has amassed a dedicated and loyal following of diners... read more