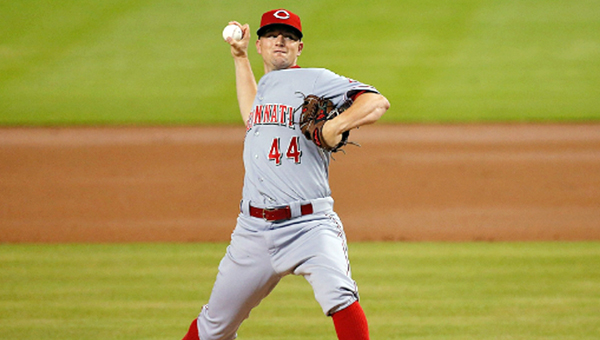 MIAMI (AP) — Todd Frazier had a season-high four hits Sunday, including three on one good foot.

Frazier hobbled after being spiked on his left foot on a play at first base in the third inning, but he stayed in the game to help the Cincinnati Reds break out of an offensive slump and beat the Miami Marlins 7-3.

Afterward, Frazier was smiling even though he said his foot was throbbing. The Reds improved to 5-11 since the All-Star break and scored more than five runs for the first time during that stretch.

“Everybody did a good job manufacturing runs,” Frazier said. “We were hitting singles. We do have the power, but it goes to show you that we know how to get runs in doing little stuff.”

Cincinnati totaled 15 hits, all but one a single. Billy Hamilton scored three times and Devin Mesoraco hit a two-run single as the Reds built a 7-1 advantage — the sort of cushion unfamiliar to them lately.

“It was great to get the separation and build the lead,” manager Bryan Price said. “It’s nice to have some wiggle room. It’s a lot more fun.”

Mike Leake (9-9) struggled with his control but allowed only one run in six innings to help the Reds take three of four games in Miami. They are 4 1/2 games behind NL Central leader Milwaukee.

“We’re still in this,” Leake said. “We’ve still got a chance. It’s up to us if we want to bear down and make it a good year, or we want to throw it in.”

The Marlins managed only eight runs and 24 hits in the series, and they’ve lost to Cincinnati in eight of their past nine games.

“I just couldn’t locate the fastball,” Turner said. “I left too many pitches over the middle. When you’re doing that on 2-0 counts, it’s a tough way to pitch.”

Zack Cozart’s two-out RBI single in the second put Cincinnati ahead. In the third inning, Hamilton and Jay Bruce each singled, stole second and scored. Bruce singled home Hamilton and scored on a double by Ryan Ludwick.

Two-out, run-scoring singles by Hamilton and Frazier in the fourth made it 5-0. The Reds went 7 for 18 with runners in scoring position.

Garrett Jones hit his 12th homer for the Marlins, who totaled five hits. They went 1 for 9 with runners in scoring position.

Giancarlo Stanton, the NL leader in home runs and RBIs, struck out four times for the second Sunday in a row. But he also robbed Kristopher Negron of an RBI extra-base hit when he made a long run for an over-the-shoulder catch near the right-field foul pole in the second inning.

Leake improved to 3-0 with a 1.93 ERA in three career starts against Miami. He allowed only three hits but walked four.

The right-hander escaped a bases-loaded, none-out jam in the third without allowing a run. Jordany Valdespin hit into a forceout, Stanton struck out and Casey McGehee grounded out.

“Not my best stuff, but I was able to throw some pitches when I needed to,” Leake said.

First baseman Frazier found himself in an awkward position when he couldn’t find the base with his left foot, and Valdespin stepped on it.

“I’m lucky — he could have taken my ankle right out,” Frazier said. “He had no room to get to the bag.”

Frazier came away limping, which earned him a visit from the trainer and Price.

“With as many injuries as we’ve had over the course of the year, I said, boy, not one more,” Price said. “We avoided disaster there.”

The Reds open a four-game series at Cleveland on Monday when Alfredo Simon (12-6, 2.84 ERA) pitches against Corey Kluber (11-6, 2.61). Simon is 0-3 since his first All-Star selection. The Reds have lost their past nine games in Cleveland, and they’re 0-5 on the road against American League teams this year.

The Marlins are off Monday and open a three-game series at Pittsburgh on Tuesday when Brad Hand (2-3, 4.15) pitches against Charlie Morton (5-10, 3.54). Miami has lost six consecutive games in Pittsburgh.

The Associated Press   Ryan Perez might look back someday and say having Tommy John surgery on his right arm... read more