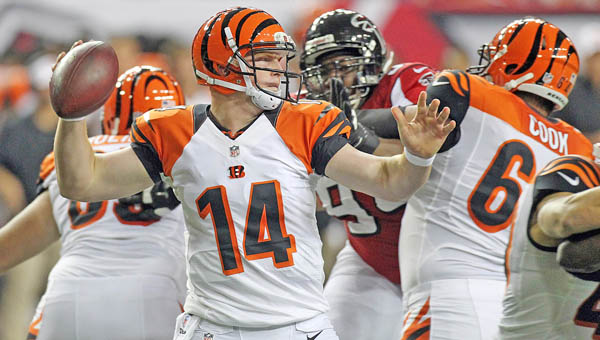 CINCINNATI (AP) — Andy Dalton is relieved. So are the Cincinnati Bengals.

Everyone one was all smiles around Bengals camp on Monday when the team made Dalton one of the highest-paid quarterbacks in the league.

Dalton signed a six-year extension, but the financial terms were not released. According to multiple reports, the deal is worth up to $115 million.

“We’re betting big on him because we believe in him,” Bengals owner Mike Brown said.

Dalton said now that the deal is done he can concentrate solely on football.

“You do have it in the back of your mind, when is it going to get done,” Dalton said. “Now we don’t have to worry about it. Like (coach) Marvin (Lewis) said, just play the game and I don’t have to have this hanging over me.

“To get this opportunity to come to the city of Cincinnati, get drafted here and play for the Bengals and now sign this extension and be here for a long time, I’m just so blessed.”

Brown said it was a “happy news day” for the organization.

“This is important to solidify our franchise going forward. Andy has earned his place here,” Brown said. “He has gained the confidence of the players, the coaches and the management of the team.”

Added Dalton: “We’re excited to know we’re going to be here for a long time.”

The quarterback has passed for more than 3,000 yards in each of his three seasons. He led the Bengals to an 11-5 record and AFC North title in 2013. He set career highs with 33 touchdown passes and 20 interceptions.

Dalton was a second-round draft choice in 2011.

Dalton has been criticized for throwing six interceptions with only one touchdown in three postseason losses. Lewis said Dalton is still improving.

“It’s stating the obvious that this is a key move for the ongoing success of our team,” Lewis said. “I congratulate our front office, and Andy and his representatives, for coming together to make this happen in a constructive way for the football team. Andy is still a young player, he has led us to the playoffs three straight years, and by far we have not seen the best of him yet.”

Dalton said the big contract won’t put any extra pressure on him to perform.

“We have high expectations for what we’re trying to do this year, and so regardless of the contract, I would have expected to go into the season with the same mentality and same attitude,” Dalton said.

CLEVELAND (AP) — If the struggling Cincinnati Reds were hoping for any momentum from winning their last series, it didn’t... read more