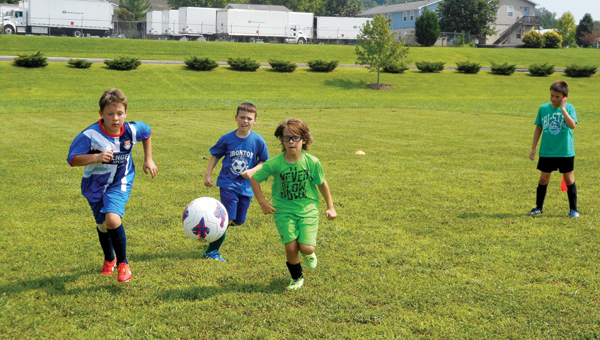 PROCTORVILLE — The Challenger Sports Soccer camp in Proctorville ended Friday but not before crowning a World Cup Champion, and this time it wasn’t Germany.

During the weeklong camp, players who were split into four teams representing the countries of Columbia, Italy, Germany, and Mexico were rewarded with points in several categories.

“We gave points for the player who worked the hardest during the week,” Challenger Sports Coach Matt Warnes said. “Points for performing well in certain drills, for winning matches against each other during the World Cup games, and for sportsmanship.”

On the final day Warnes and fellow coach Matt Spencer also awarded bonus points for bringing displays such as flags and foods of the country the players were representing as well as for essays the players wrote about their country.

“We wanted this to be a little more than just playing soccer,” Warnes said. “We wanted it to be a true learning experience.”

The final four World Cup tournament games were played on Friday and when the dust cleared, Mexico was declared the winner.

But, the competition was less about winning and losing and more about growing as a player. After each game Warnes had players from the teams come up and tell each other one thing they did well and one thing they can improve on.

“It’s about getting better,” Warnes said. “Part of getting better is hearing from your peers on something, in a constructive and respectful way, that you can do better. But, part of that is also hearing what you are already doing well. We wanted to just give the kids feedback on how their game could progress even further.”