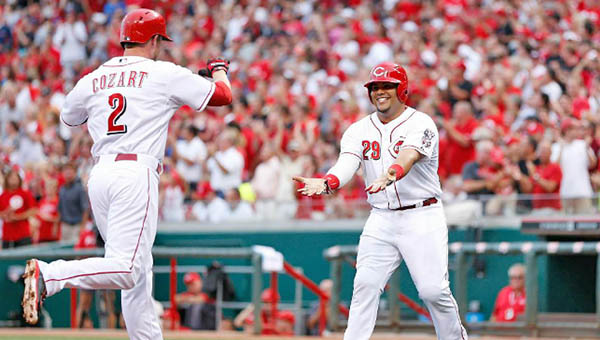 Cincinnati shortstop Zack Cozart (2) is congratulated by Brayan Pena after he belted a three-run homer in the second inning to help the Reds beat the Cleveland Indians 8-3 Wednesday. (Courtesy of the Cincinnati Reds.com)

CINCINNATI (AP) — The bottom of the Cincinnati batting order is putting the Reds on top.

“We have to pick up some slack,” Cozart said. “We can’t depend on the big guys every night.”

Getting off to a lead is a difference maker,” Reds manager Bryan Price said.

Mat Latos pitched shutout ball into the eighth inning and chipped in with a hit.

Latos (4-3), making his 10th start since opening the season on the disabled list and being activated on June 14, allowed just one runner past second base before Yan Gomes led off Cleveland’s three-run eighth with his 16th homer.

Latos gave up six hits and three runs with two walks and five strikeouts in 7 2-3 innings.

Cozart, who hadn’t homered since June 1 at Arizona, connected off Danny Salazar (4-5) with two outs in the second. Cozart’s third homer of the season was the first allowed by Salazar in five starts since May 15 at Toronto.

“It felt good,” Cozart said. “It is not only getting hits but extra-base hits. Our pitchers have been pitching so well. We don’t want them to go home empty.”

Negron made it 5-0 with a two-out drive in the fourth. The homer was his third of the season, all since being called up from Triple-A Louisville on July 10.

Cozart was excited for Negron, too.

“Every time he gets a chance to play, he takes advantage of his playing time,” said Cozart of Negron, who was taken off the 40-man roster after he had four at-bats in 2012, his only big league experience until now.

“Overall, he was better than his line score,” manager Terry Francona said. “He made two costly mistakes to the bottom of the order.”

“I didn’t throw too many pitches today,” Salazar said. “I left a couple of balls a little high. I was trying to throw a slider down-and-away (to Cozart). I just missed my spot.”

The Reds broke open the game with a three-run seventh that started with Negron’s double for his first career three-hit game. Cozart hit an RBI single, Latos followed with a single and Todd Frazier added a two-run double.

Indians: Center fielder Michael Bourn went 0 for 3 with one strikeout in five innings for Double-A Akron in the first game of his rehab assignment on Tuesday. He has been out since July 6 with a left hamstring strain.

Reds: Right-handed reliever Logan Ondrusek threw his first long toss and bullpen session since he went on the disabled list on July 22 because of a strained right shoulder. He will throw another bullpen on Friday or Saturday and be reassessed, Price said.

Indians: Left-hander T.J. House will become the second straight Cleveland pitcher to face Cincinnati for the first time in his career. The Indians have lost two straight after a four-game winning streak.

Reds: Right-hander Homer Bailey will try to even his career record against the Indians at 3-3 in eight starts in Thursday’s series finale. The Reds have won seven straight over Cleveland in Cincinnati since a 3-1 loss on July 2, 2011.

The Reds introduced the 2015 All-Star Game logo to fans and media. A large version is displayed at the top or the right-field bleachers near the Ohio River. … The team honored its four All-Star players — Alfredo Simon, Johnny Cueto, Aroldis Chapman and Frazier. They were presented with commemorative plaques in a pregame ceremony.

WHERE HAVE YOU BEEN?

Negron hit his third home run in 15 games since his recall on July 10. He hit three home runs in 75 games at Triple-A Louisville.