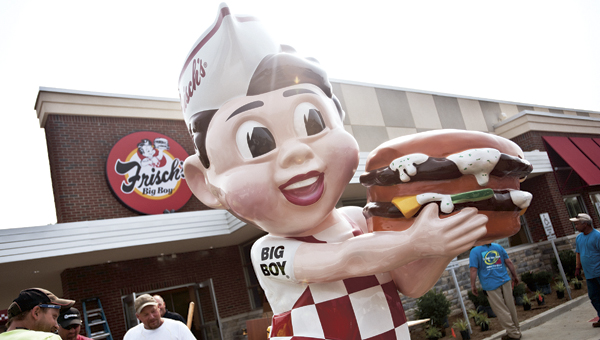 THE TRIBUNE/JESSICA ST JAMES
The Frisch’s Big Boy statue after just being erected in front of the brand new restaurant in Ironton. Monday marks opening day.

It may be for what the restaurant chain is best known — a nearly 8-foot-tall 350-pound fiberglass statue named Big Boy.

What could be considered the capstone of last-minute preparations arrived in Ironton in the back of a white full-size pickup truck Wednesday morning and was placed in a patch of dirt in front of the Frisch’s Big Boy at the Gateway Project on Ninth Street. The statue’s arrival is indicative of a restaurant that will soon have its grand opening.

The restaurant’s maintenance supervisor, Dale Fugett, said the $7,200 statue took six weeks to make. It is poured into a mold then meticulously painted with, its trademark red-and-white-checkered overalls while carrying a Big Boy sandwich.

The inspiration for Big Boy’s name, as well as the model for its mascot, was from Richard Woodruff, of Glendale, Calif. When Woodruff was 6 years old, he walked into the diner Bob’s Pantry, which eventually became Big Boy, as owner Bob Wian was attempting to name his new hamburger. Wian said, “Hello, Big Boy” to Woodruff, and the name stuck.

“We planned on hiring 120 people and we have hired 115 so far,” Jim Kratzenburg, Ironton businessman and investor in the restaurant, said. “We filtered through more than 500 applications to hire the people we got.”

Big Boy officially opens at 6:30 a.m. on Monday, Aug. 11. A live radio remote will take place sometime in the coming weeks, Kratzenburg said. Operating hours will be 6:30 a.m.-11 p.m. Sunday through Thursday and 6:30 a.m.-midnight on Friday and Saturday.