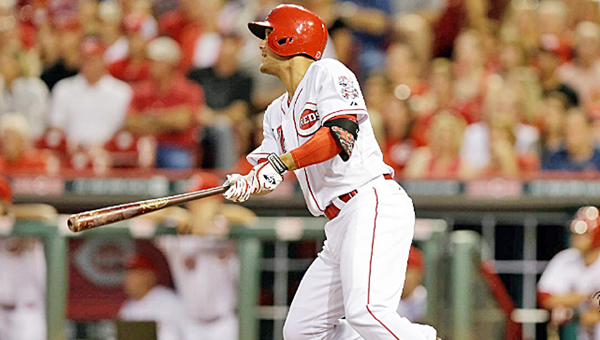 Cincinnati second baseman Kristopher Negron had two hits and an RBI as the Reds blanked the Cleveland Indians 4-0 Thursday. (Courtesy of the Cincinnati Reds.com)

CINCINNATI (AP) — Homer Bailey went seven innings, singled and scored, and knocked down a liner coming right at his head. Quite a lot went into ending this losing streak.

Bailey pitched seven innings to end his slide against Cleveland, and Billy Hamilton had an RBI triple and scored a run Thursday night, leading the Cincinnati Reds to a 4-0 victory over the intrastate rival Indians.

The Reds won three of four in the annual series, splitting two games in Cleveland and sweeping a pair at Great American Ball Park.

Bailey (9-5) had lost his last three starts against the Indians. After pitching out of trouble in the first, he settled in and allowed four hits while fanning eight. He also singled and scored.

“He pitched a really great game,” manager Bryan Price said. “He scuffled early with his command, but he came back strong and gave us a great chance to win.”

Bailey overcame an unsettling moment in the fifth inning, when Jose Ramirez lined a pitch directly at his face. The right-hander turned away and knocked down the ball with his glove, recovered and threw to first from his knees. Three times, Bailey shook his head as he regained his composure.

“I’ve been bit harder by bedbugs,” he said. “I saw it pretty late. I almost caught it in my arm. It glanced off my glove a little bit.”

Hamilton had a hand in two of the four runs off left-hander T.J. House (1-3), who made his 11th career start.

House gave up eight hits while pitching into the seventh and remained winless on the road, falling to 0-3 in seven games.

Hamilton singled in the first and scored on first baseman Carlos Santana’s throwing error. Ryan Ludwick’s RBI single made it 2-0.

Bailey singled and scored on Hamilton’s triple in the second inning. Hamilton rounded third too far and was caught in a rundown for the final out of the inning, leaving it 3-0. Kristopher Negron added an RBI single in the sixth.

The Indians lead the intrastate series 45-44. They have lost eight straight games in Cincinnati, with their last win at Great American Ball Park coming on July 2, 2011. The home team has won 14 of last 15 games in the series.

Cleveland is 9-9 in interleague play this season, only 3-7 on the road without the designated hitter. The Indians have lost 10 of their last 13 in NL ballparks. … The Reds are 6-9 against AL teams this season. … C Yan Gomes extended his hitting streak to 13 games, the second-longest by an Indian this season behind Michael Brantley’s 15-game streak. … Reds C Brayan Pena has an 11-game hitting streak, one shy of his career high from 2009. … Negron was voted the series’ most valuable player. He went 7 for 13 with a homer.

Indians: Right-hander C.C. Lee was called up from Triple-A Columbus. Lee pitched two scoreless innings against Cincinnati and is 0-0 with a 3.68 ERA in 16 games over four stints with Cleveland this year. Starter Danny Salazar was optioned to Columbus, where he’ll make one start before the Indians consider bringing him back.

Reds: There’s still no estimate for when second baseman Brandon Phillips will be able to resume hitting. He tore a ligament in his left thumb on July 9. The Reds hope to have him back by the end of the month.

Reds: The Reds open a weekend series against Miami, with Mike Leake (9-9) facing Nathan Eovaldi (5-6). Leake is 3-0 in three career starts against the Marlins with a 1.93 ERA. The Reds will induct Ken Griffey Jr., Ron Oester, Dave Parker and the late Jake Beckley into their Hall of Fame before the game on Saturday.