How their garden grows 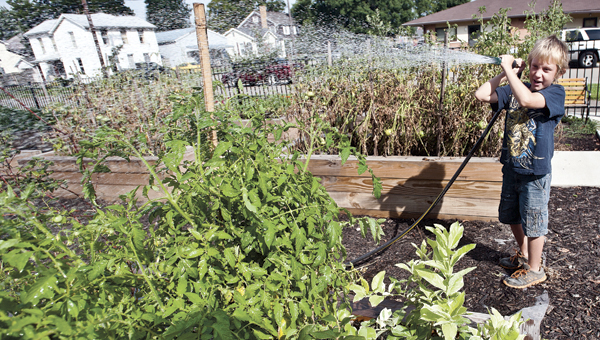 THE TRIBUNE/JESSICA ST JAMES
Nine-year-old Devlin Morton, of Ironton, waters the garden that he helped grow this summer through, Youth Empowerment Activities organization, at the site of the Ironton Community Garden located along South Seventh Street. Items grown were tomatoes, blueberries and a lemon tree.

For Devlin Morton, the best part about a garden isn’t the stuff that comes out of the ground.

“It is really about the watering,” Devlin, 9, said.

Devlin is part of the Youth Empowerment Activities program of the Ironton-Lawrence County Community Action Organization that put out tomatoes, blueberries and a lemon tree in its plot at the Ironton Community Garden.

In fact, on the days when the YEA participants aren’t at the garden, Devlin still shows up to water the plants.

“I water myself when I water,” he said.

The spring and summer of 2013 was the introduction of the Community Garden to Ironton whose goal was to give those living in apartments or homes with limited yard space some land where they could plant vegetables or flowers on their own.

This season 60 percent of those part of the first effort came back to put out their second garden.

“And we had 40 percent new people,” Carol Allen of Ironton in Bloom said. “Some people said it was too much work. We had some who decided that ‘I can do this at home. I have the room there and I know now how to do it.’”

The garden started out with 38 plots, but that number was reduced as several plots were turned into one.

Among those participating were Shawnee Mental Health and a volunteer from the downtown churches’ Harvest for the Hungry food pantry.

“That is going from there to the food pantry,” Allen said. “We have some parents and grandparents with their children. We have the young people from Mended Reeds and the others are probably 55 and older. There is a nice mixture within the community. There are individuals from both the black and white race, which is something we really wanted about being a community partner with.”

The YEA summer program is open to youth kindergarten through 17 years old and attracted 12 this year, who spend several days a week tending their garden.

“This gives them something to care about and look forward to,” John Goodwin, director of the YEA program, said.

Shelter to host another pet adoption

As the kennels fill up at the Lawrence County Animal Shelter, staff there are planning a second pet adoption for... read more