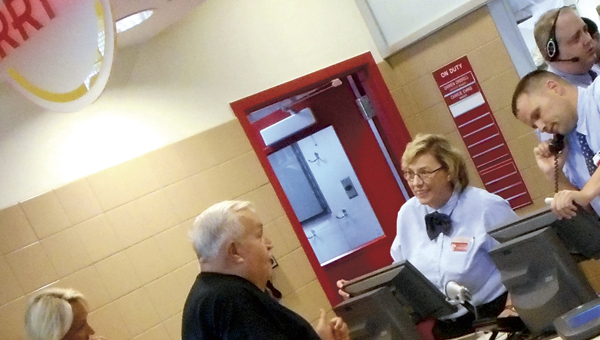 the tribune/brandon roberts
A line of eager diners waiting for a table stretched out the door on Monday during the first day open to the public at the Frisch’s Big Boy in Ironton.

A hostess at the Ironton Big Boy weaved through a sea of people and said it loudly for a second time.

When no one approached the podium she made her way through the crowd again and opened the front door.

Before the echo of her voice faded a man and woman hurried toward the door into what looked more like a tourist attraction on Monday than a restaurant during its much-anticipated first day of business.

“It’s just been wonderful,” Jim Kratzenburg, investor in the restaurant, said. “We’ve had a lot of people here today and a lot of them are not local.”

Large groups of eight-to-10 people steadily arriving throughout the day caused some wait time for seating, but Kratzenburg said even the crowd didn’t stop people from coming out.

“Everyone has been very patient,” he said. “I think just about everyone knew there was going to be a wait so it didn’t stop them from coming. Plus, our drive-thru has been absolutely packed.”

For businesses busy is never a bad thing. Store manager Darren Driskell said just before 4 p.m. he was notified that the Ironton store had set the opening day sales record for day shift.

“It’s been very, very busy,” he said. “We got rolling early; we were slammed at 6:30 a.m. when we opened, then it slowed a bit, then at lunch it picked back up and hasn’t stopped since. We are seeing exactly what we expected to see. It’s plain to see people are glad to have Big Boy back in Ironton.”

Excitement outweighed fatigue even for employees who had been at work since the doors opened.

“I’ve been here since 7 a.m.,” waitress Milla Piercy said as she scurried from the kitchen toward the dining room. “I haven’t stopped yet and probably won’t be able to for a while.”

For 35 years he’s arrived on the scene of deaths in Lawrence County. Coroner investigator Bill Nenni has seen a... read more