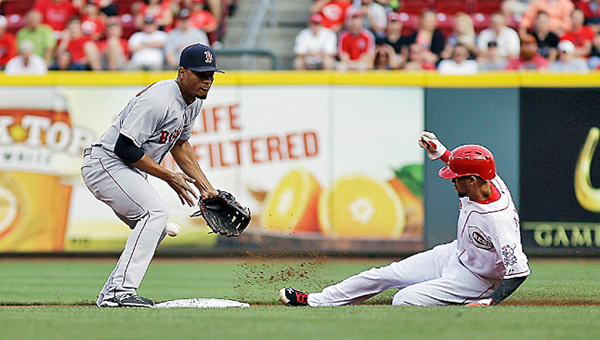 Cincinnati’s Billy Hamiton steals second base during the first inning of Tuesday’s game. Hamilton scored but the Reds lost to the Boston Red Sox 3-2. (Photo Courtesy of The Cincinnati Reds.Com)

One pitch after ducking away from Broxton’s high-and-inside fastball, Cespedes launched a no-doubt, 433-foot drive to center field with two outs in the eighth inning to give Boston a 3-2 win over the Cincinnati Reds on Tuesday night for back-to-back victories for the first time since a five-game winning streak from July 13-20.

“I have no regrets,” Reds; manager Bryan Price said. “Broxton has been outstanding since coming off the disabled list in April. Broxton (4-1) had an ERA of one (1.07). He went right after him.”

Cespedes hit his 19th homer of the season and second with Boston — one in each of the last two games. He has reached base at least once in all nine games he’s played for the Red Sox since they acquired him from Oakland in a trade.

Tommy Layne (1-0) got the final out of the seventh inning for the win.

Kojo Uehara pitched the ninth for his 26th save.

Kelly walked Bruce, setting up Todd Frazier’s RBI single. Devin Mesoraco, who hit a grand slam and two-run homer while setting a career high with six RBIs in Cincinnati’s 7-2 win over Miami on Sunday, followed with a run-scoring hit.

Mat Latos retired 11 straight batters before Daniel Nava led off the seventh with a double. Xander Bogaerts snapped a 0-for-15 slump with an RBI single.

The right-hander was making his 11th start since coming off the disabled list in mid-June. He pitched out of jams in the first and third innings, getting Cespedes to pop up and fly out to get out of trouble.

“I found myself in trouble but was able to get out of it,” Latos said. “I concentrated on keeping the ball down and getting strike one, then expanding the strike zone.”

Latos gave up five hits and one run with one walk and five strikeouts in seven innings.

“Mat was terrific,” Price said. “With runners in scoring position, he did a great job.”

Kelly allowed five hits and two runs with three walks and four strikeouts in six innings as the Red Sox improved to 4-3 on their eight-game road trip.

Red Sox: RHP Anthony Ranaudo makes his second major league appearance and first against a National League team when he starts at Cincinnati on Wednesday.

Reds: RHP Mike Leake makes his second start of the season against Boston on Wednesday. He left with a 3-2 lead but the Reds lost 4-3 at Fenway Park on May 7.

Reds: RHP Homer Bailey’s sore elbow prompted the Reds to push his next scheduled start from Wednesday to Saturday at Colorado.

Raisell Iglesias was signed by the Reds on June 27 to a seven-year contract. He was in Cincinnat for the first time since. Current Reds, Cuban natives, Brayan Pena and Aroldis Chapman encouraged Iglesias to sign with Cincinnati, according to the 24-year old RHP.

Skip Schumaker batted for Latos in the seventh inning, marking his 1,000th appearance.

Kelly has gotten at least one hit in each of his first two games with Boston. His first career stolen base in the third inning was the first by a Boston pitcher since Bill Landis in 1969.