Dedication nears for opening of Port of South Point 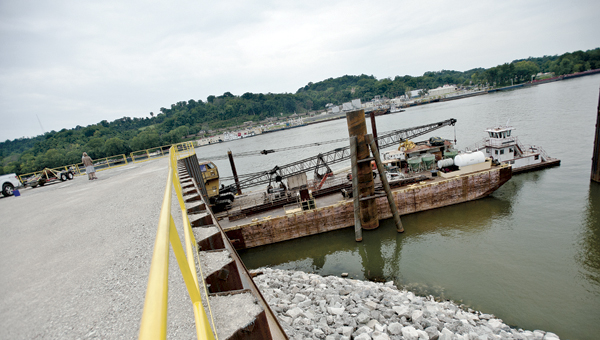 the tribune/jessica st james
Various views of the Port of South Point located at The Point industrial park, along the Ohio River.

SOUTH POINT — Today the Port of South Point is as quiet and peaceful as the view upriver where the peninsular Virginia Point juts into the Ohio. But in a few weeks that scene should change, if the strategy of Lawrence County economic development leaders pays off.

The scenario they want are trucks loaded with product driving onto the face of the port’s 190 foot-wide public dock where a boom crane will swing those truckloads into barges waiting at the base. And do it over and over again bringing more jobs and commerce to the eastern part of the county than ever before.

Dedicating that dock and officially declaring it the Port of South Point will be done with much hoopla this Tuesday at 11 a.m. when the Lt. Gov. Mary Taylor will be among the keynote speakers.

“This will give manufacturers and industry in our region the opportunity to have a logistical advantage inside the industrial park to produce and move large fabricated items,” Jeremy Clay, director of The Point, said.

Superior Marine Inc. of South Point will be the operator of the dock and has hired a dock manager to oversee the port.

“Without a doubt, this port opening will change the face of economic development in our region by allowing access to new markets, supply chains along the diversification and enhancement of our region’s existing industries,” Michael Manns, chief financial officer of Superior Marine, said. “This will also open doors for new ventures and will attract dynamic commerce to the area. Superior Marine takes pride in being a part of The Port of South Point.”

The port offers a public dock that will be open to any business in the area that needs a dock to move product across.

SOUTH POINT — Congressman Bill Johnson visited the Snak Shak on Wednesday to mingle with residents and to get an... read more