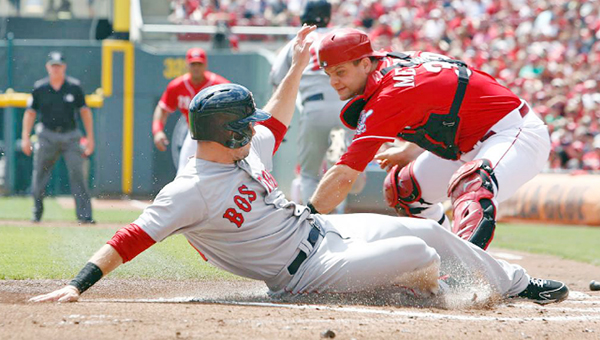 Cincinnati Reds’ catcher Devin Mesoraco (right) can’t get the tag down in time to get the sliding Daniel Nave who came home to score in the first inning Mike Napoli hit into a fielder’s choice. (Photo courtesy of The Cincinnati Reds.com)

Mike Napoli hit a two-run homer and drove in three runs to help the Boston Red Sox wrap up their first winning road trip of more than three games this season with a 5-4 win over the Cincinnati Reds on Wednesday.

The lost all four games by one run to Boston this season and are 17-27 in one-run games.

Skip Schumaker and Cincinnati’s starting pitcher each hit their second home runs of the season, but the Reds still ended their seven-game home stand with a 3-4 record after opening by sweeping a two-game interleague series against in-state rival Cleveland.

“One-run losses are hard to take, certainly,” manager Bryan Price said. “You always have regrets. It has been a difference maker. We have to play better baseball to be honest. We’re playing hard but falling short. We have to find a way to win some of these.”

Right-hander Anthony Ranaudo became the first Boston rookie to start his career 2-0 since Justin Masterson won his first three in 2008 and the Red Sox finished their eight-game trip with five wins.

Burke Badenhop and Junichi Tazawa each pitched one perfect inning before Edward Mujica overcame back-to-back leadoff singles in the ninth for his third save.

Schumaker and Leake each hit solo home runs in the bottom of the fourth to give the Reds a 3-2 lead. The Red Sox immediately responded with two outs in the fifth on Yoenis Cespedes’ RBI single and Napoli’s 361-foot, opposite-field homer to right, his 15th homer of the season and second of the trip.

“Anytime you get a lead and give it up, it’s not ideal,” Leake said.

They Reds are 60-60 on the year and need to make a push but Schumaker insists this is not time to panic.

“As bad as we’ve played, we’re right in the thick of this,” Schumaker said. “I was on a team that was 11-games out in September. We’re not there yet.”

Ranaudo allowed eight hits and four runs with one walk and one strikeout in six innings.

Leake (9-11) lasted five innings, his shortest outing in 11 starts since going five innings on June 15 at Milwaukee. He allowed eight hits and five runs with one walk and three strikeouts.

Reds: RHP Alfredo Simon takes a 0.00 ERA in 3 2-3 innings over three games at Coors Field into his first career start on Thursday in Colorado, where the Reds open a seven-game road trip.

Reds: RF Jay Bruce was scratched from the Reds’ original starting lineup due to illness. … RHP Logan Ondrusek and 2B Brandon Phillips are scheduled to begin rehabilitation assignments with Triple-A Louisville on Friday.

Mike Leake’s home run off Anthony Ranaudo was the fourth of his career and raised his career hit total to 65. Leake has more hits than any Major League pitcher since his debut in 2010.

Aroldis Chapman has made a record 49 straight appearances with at least one strikeout. He struck out the side in the ninth for the 10th time.

Boston CF Jackie Bradley Jr. snapped a 0-for-35 slump with a second-inning single.

Boston is 24-23 in one-run games. The Red Sox were tied with Miami for the most one-run decisions in the majors going into Wednesday’s games. The Reds slipped to 17-28 after going 27-22 last season.

LAVALETTE, W.Va. — Ironton proved being in your 40s is a good thing. The Fighting Tigers had three players put... read more