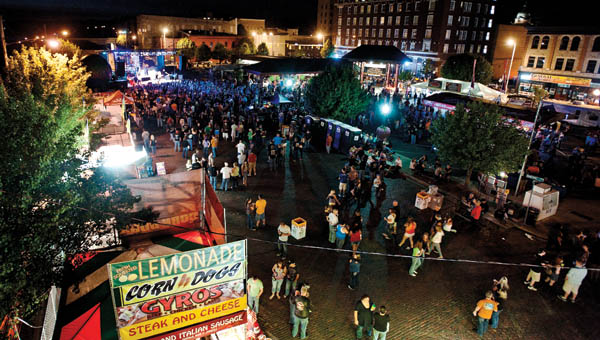 Eventgoers gather on the Rally grounds at the annual Rally on the River in downtown Ironton.

The rumbling crackle and pop of motorcycle engines sound like money to anyone doing business in downtown Ironton during the Rally on the River.

Unger’s Shoes sales associate Kelly Paholsky stood on the corner outside the business as several people browsed the tables and racks of footwear.

“We do a lot more business this weekend than normal,” she said. “This is by far one of our busiest weekends of the year.”

Tickets for the Great River Raffle went on sale Thursday and at 2 p.m. on Saturday already 162 tickets had been sold.

“It’s going great,” Laura Kelley said. “We are having two early bird drawings for $500 each and winners’ tickets go back in the pot. Someone could win a car and use it to pull the boat they win.”

“My belts keep selling out,” he said. “I really couldn’t have opened at a better time.”

It doesn’t take numbers on a spreadsheet to know the Rally has a positive impact on the local economy.

“Just drive through town and see how busy everything is,” Rich Blankenship, Ironton mayor, said. “This event does wonders for our businesses and has an enormous impact on our economy.”

For 10 years Rally on the River in Ironton has been bringing thousands to the city once known as “little... read more