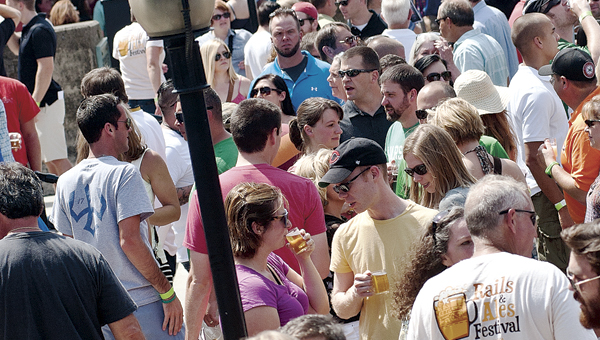 Beer connoisseurs from around the Tri-State were treated to more than 100 types of beer over the weekend during the second annual Rails and Ales festival in Huntington, W.Va.

Vendors from around the country descended on Heritage Station Saturday to bring a multitude of brews ranging in flavor and alcohol volume.

“I’m trying to test at least one beer from every vendor here,” Jacob Hunter of Prichard, W.Va., said. “This is just really cool, I wanted to come last year but they were sold out before I even heard about it.”

This year’s Rails and Ales was no different. The 1,500 tickets allotted for the event were gone in a little under two hours.

“Tickets for the event are a hot commodity,” Josh Johnson of Huntington said. “I know I had friends who bought tickets on craigslist for like 70 bucks, from a ticket scalper. I’m sure they aren’t the only ones who did that.”

The Rails and Ales festival concluded Huntington’s craft beer week, a week dedicated to the promotion of microbreweries.