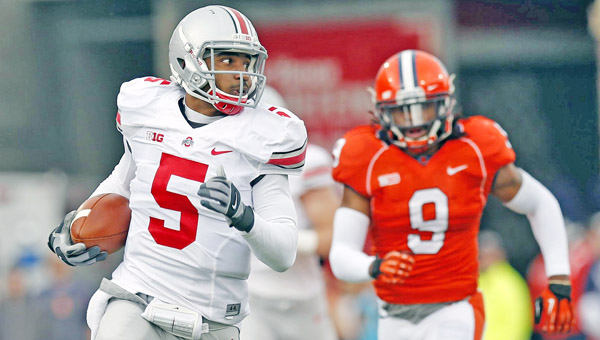 COLUMBUS (AP) — With just over two weeks remaining before its season opener, it appears No. 5 Ohio State has already sustained a devastating loss.

Two-time Big Ten offensive player of the year, quarterback Braxton Miller, considered among the top contenders for the Heisman Trophy, reportedly reinjured his throwing shoulder in practice on Monday.

Ohio State officials declined to confirm Miller was hurt or speak to the severity of the injury, first reported by The Columbus Dispatch.

Miller, a senior, had missed all of spring practice after what was termed “minor, outpatient surgery” on his right shoulder. When workouts resumed in August, he had been held out of a scrimmage and a few practices after experiencing some soreness in the shoulder. But he proclaimed last week and again on Monday that he was healthy and ready to go.

Head coach Urban Meyer said last week that the soreness was an expected result of Miller’s throwing in practice.

“I anticipated this,” Meyer said. “I’ve dealt with guys with arm issues before, and we’re being very cautious. He could have practiced (in one of the workouts in which he didn’t play) but we’re in it for the long haul. So he’s right on schedule.”

Speaking briefly with reporters after Monday’s first practice of a two-a-day session, Miller said he was feeling fine and would be in good shape for the season opener on Aug. 30 against Navy in Baltimore.

At the Buckeyes’ media day last week, Miller said his arm felt good and he was able to throw as much as he liked.

“After my rehab, I was throwing to guys at least four days out of the week,” he said. “Our timing and our situation-wise, when I get back in there it’ll be like I never left.”

If Miller is unable to play in the Buckeyes’ opener, redshirt freshman J.T. Barrett would likely get the start, backed by sophomore Cardale Jones.

But the falloff in experience would be precipitous.

Miller has thrown 666 passes in his glittering three-year career. Barrett has never played in a game, and Jones has thrown only two passes.

Barrett, a 6-foot-1, 225-pounder out of Wichita Falls, Texas, was an acclaimed recruit who watched along with Jones last year as Miller took most of the snaps in the Buckeyes’ 12-2 season. When Miller was hurt for most of the San Diego State, California and Florida A&M games with a sprained knee, senior Kenny Guiton had big games while leading Ohio State to victories.

But now Guiton has graduated, and the Buckeyes might have to adapt on the fly to a new signal-caller.

Making that even more difficult is that Ohio State is without four of its five starting offensive linemen, its leading receiver (Corey Brown) and 1,500-yard rusher Carlos Hyde from last year’s team.

ST. LOUIS (AP) — The Cincinnati Reds picked the lone fresh arm for a worn-out bullpen, and ended up with... read more