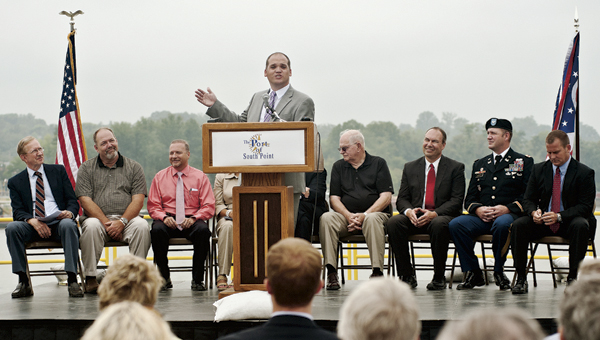 SOUTH POINT — At times the train whistles drowned out the speeches, but those on the platform didn’t seem to care because they understood those trains are part of the grand plan to give another shot into the economic arm of the county.

The short version of that plan comes down to five words: the Port of South Point.

On Tuesday morning county and state officials and economic development leaders, including members of the Lawrence Economic Development Corporation, gathered at the newly created cargo dock overlooking the Ohio River to dedicate it and start the next phase of job creation for Lawrence County.

Representing one of the many partners in the port creation was Greg Murphy of the Ohio Department of Transportation.

“ODOT’s mission is easy movement of people and goods,” Murphy told the audience of dignitaries. “This will help us achieve our mission. Thanks to this dock we have an access point for trucks, trains and barges.”

The goal of the dock is to provide a way to move product from truck or rail onto barges.

Part of the financing of the multi-million project came from an ODOT $9.5 million logistics and distribution grant. With the cargo dock, Lawrence County can now position itself to be part of the M70 marine corridor that connects Pittsburgh with Kansas City.

“For the past three years there has been a concerted effort to identify the water corridors as maritime corridors for freight,” Dr. Bill Dingus, executive director of the LEDC, said. “We see we’re being one of the many hubs for the entire corridor.”

As truck and train traffic multiplies to the point of capacity, waterways can be the answer.

“The answer to much of this is the idea of the M70 corridor and when the federal government does the new transportation bills when we are in position on the M70 as a major hub that will position us for tremendous support,” Dingus said.

Building the port began in February 2010 when Ronald Cole, an Alabama-based logistics consultant, offered the first input into the project that was subsequently turned around by Southern Marine of Chattanooga, Tenn. What was created is a dock with a 96-foot wide face that has 20 eyebeams driven into the bedrock. Soon a boom crane will be mounted on it that can handle moving product weighing a maximum of 300 tons 365 days a year.

“This is where the river does not control our schedule,” Jeremy Clay, director of The Point industrial park, said.

Keynote speaker for the dedication was Ohio Lt. Gov. Mary Taylor who said the creation of the dock follows the philosophy of the current administration to find out what a community wants and help facilitate it.

“We will reach out to the local leaders and find out what is important to you,” Taylor said. “This is great not only for South Point and Lawrence County but the state of Ohio. Now we see so many opportunities for the southeast part of the state. This is jobs.”

A New York-based insurance company has filed a lawsuit against King’s Daughters Medical Center, claiming it should not be responsible... read more