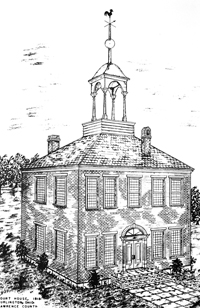 Lawrence County officials and history buffs gear up for the county’s bicentennial in 2016, County Commissioner Bill Pratt would like to celebrate by leaving a lasting memorial to the event that can be used by future generations.

He wants to recreate the original courthouse that once stood in Burlington, with the goal of turning the new structure into a community center for the eastern end of the county

“I had seen a picture of it and was thinking about something to do in Burlington,” Pratt said. “We have a description of it, not exactly the architectural plan, but we have window sizes, where the doors were, the size of the bricks.”

Burlington was the first seat of Lawrence County and the site of the first courthouse and jail. The jail remains standing and is currently the object of a restoration project by the Concerned Citizens of Burlington.

The courthouse was built the second year Lawrence was a county at a cost of $1919.31, according to Pratt. It was a 35-foot square stone two-story structure.

Recently Pratt discovered that the original brass and cast iron weathervane that stood atop the Burlington building is stored at the third floor of the current courthouse.

“You can see where it is forged in a blacksmith’s shop,” he said.

The commissioner hopes to put a replica on top of the recreated courthouse and preserve the original weathervane.

“It’s important ( to build a new courthouse) because that was the beginning of Lawrence County,” he said. “Burlington was once the county seat and it is important historically for the rest of the county.”

Pratt is hoping to have a six-month celebration starting in the spring of 2016 and has formed a bicentennial committee to organize the events, including the September dedication of the Burlington courthouse.

“It is looking pretty favorable,” he said.