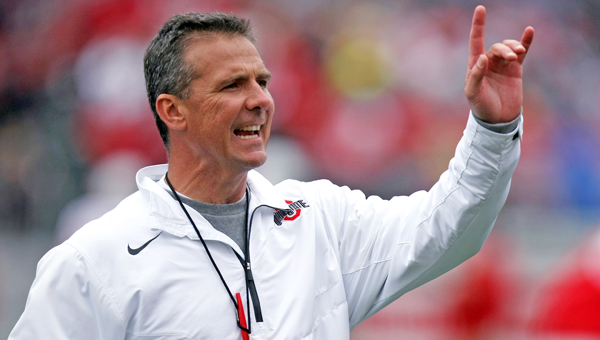 COLUMBUS (AP) — A week after the loss of three-year starting quarterback Braxton Miller, Ohio State coach Urban Meyer is going through final preparations for the Buckeyes’ opener on Saturday against Navy.

He says his team is ready.

“Oh, yeah. If you have good players, a good team (then you’re excited),” he said, pausing before joking, “I’ll fake it sometimes, if you don’t have a good team.

“But I can tell you this: I think we got a good team.”

Meyer disclosed that Miller, a two-time Big Ten player of the year and on the short list of Heisman Trophy frontrunners, will have surgery on the torn labrum in his right (throwing) shoulder on Tuesday. Dr. James Andrews, renowned for his work with athletes, will perform the operation.

Normally, this would be a week of celebration for Miller, who was hurt a week ago in practice. He was voted a team captain, along with tight end Jeff Heuerman, defensive lineman Michael Bennett and two unrelated players named Grant — defensive back Doran Grant and linebacker Curtis Grant.

Instead, Miller will miss Saturday’s game while recovering from the surgery taking place in Gulf Breeze, Florida. He is not expected to return to the field until next August.

J.T. Barrett, a redshirt freshman who has never taken a collegiate snap, will start in his place. He will be backed by redshirt sophomore Cardale Jones, who has thrown a total of two passes in his Ohio State career.

Both may see action, although Barrett has a slight edge.

“It was thrust upon us pretty quickly because in my heart I thought Braxton would be ready to go. I didn’t envision this,” Meyer said. “I thought, man, this would be a really close battle for the backup spot. J.T. is the starting quarterback, but there’s not a big separation.”

The Buckeyes still have several other spots up for grabs.

Meyer said Billy Price, Joel Hale and Antonio Underwood were fighting for the starting job at left guard, the one starting cornerback would be either Gareon Conley or Eli Apple and that Jacoby Boren and Alabama transfer Chad Lindsay continue to challenge for the starting center spot. In addition, there are six players in the wide-receiver derby but only three will start the game at M&T Stadium in Baltimore on Saturday afternoon.

A lot of the talk after Monday’s practice dealt with Barrett and picking up the slack for the loss of Miller.

Taylor Decker, the only returning starter on the line at left tackle, likes what he’s seen so far out of Barrett. But also recognizes that the rest of the team must bear a little bit more of the burden with such a new player at the controls.

“He’s been taking the reins of the offense,” Decker said. “He’s stepped up, he’s voiced up and he’s kind of taken control. That’s good to see that he’s not going to back down from it. Him being a young guy and not have a lot of experience, we just have to make him look better. The line has to play that much harder protecting and the receivers have to make plays until he gets comfortable.”

Wide receiver Evan Spencer believes that many won’t be able to notice a substantial difference on Saturday. Barrett’s last complete season was as a junior at Rider High School in Wichita Falls, Texas, three years ago.

“We’re running the same offense (as last year),” he said. “There’s only so many ways to scheme up things. He’s very mobile, and he can make all of throws on the field. It’s going to be different, but at the same time when you see us out there this week a lot of stuff will look pretty similar.”

Meyer — this time he wasn’t kidding — said he was enthused about where the Buckeyes are mentally and physically with the start of the season looming.

“I like where we’re at, especially after today’s practice, and I like how they responded to Braxton’s injury,” he said. “So I think we’re pretty ready.”

A lot has changed since last time Reds played Cubs