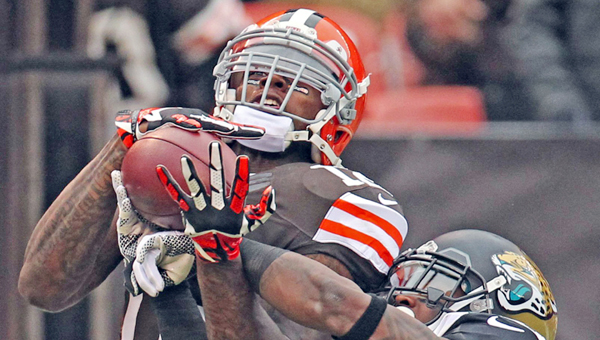 CLEVELAND (AP) — Josh Gordon’s wait is over, and so is his 2014 season. Now the star wide receiver’s career is in peril.

The Browns learned Wednesday that Gordon’s indefinite suspension by the NFL has been upheld and he will miss at least 16 games for another violation of the league’s substance abuse policy. A repeat drug offender, Gordon had appealed the penalty, hoping it would be reduced so he could play this season.

The NFL, though, came down hard on Gordon, who must now pay the price for stepping out of bounds.

The league announced that arbitrator Harold Henderson supported Gordon’s yearlong suspension for marijuana use. The Pro Bowler, who was subject to more frequent testing, will begin serving his suspension immediately and the league said in its statement that his “eligibility for reinstatement will be determined following the 2014 season.”

In the meantime, Gordon is not allowed to practice with the team, attend meetings or other club functions.

Browns general manager Ray Farmer expressed some disappointment at the decision, but said the team has no choice but to move ahead without Gordon.

“While we may have strong feelings on the timing and the process of this decision, we have also consistently communicated that we will focus on what we can control in our day to day approach,” Farmer said in a statement. “Right now that is preparing our team for the 2014 season and at the same time, supporting Josh however we are able under NFL guidelines during his suspension.”

The Browns had feared for months this would be the outcome, and now that it’s official, the club will have to somehow make up for the league-leading 1,646 yards, 18.9 yards per catch and nine touchdowns Gordon produced last season.

“I’d like to apologize to my teammates, coaches, the Cleveland Browns organization and our fans,” Gordon said in a statement.

“I am very disappointed that the NFL and its hearing office didn’t exercise better discretion and judgment in my case. I would like to sincerely thank the people who have been incredibly supportive of me during this challenging time, including my family, my agent, my union, my legal team, and the Cleveland Browns staff.”

While he’s out, Gordon, who served a two-game suspension for a drug violation last season, will need to pass drug tests, comply with treatment and apply for reinstatement with Commissioner Roger Goodell before he plays again. Gordon could possibly return inside a year if he stays clean.

Gordon met with league officials in New York on Aug. 4 to appeal his suspension. As the days past, there was growing speculation he might not be punished to the letter of the collective bargaining agreement. But Henderson sided with the league’s initial ruling after an exhaustive process.

The Browns have known Gordon could be banished for some time and they’ve been eager for a resolution to his case, which hung over their training camp. He continued to practice and played in Cleveland’s first three exhibition games.

Gordon fought the suspension by hiring attorney Maurice Suh to represent him at the appeal hearing. Suh, who had successfully gotten a suspension reduced for Seattle cornerback Richard Sherman, argued that Gordon tested positive for marijuana due to secondhand smoke. Gordon’s representatives also said test results of his samples were inconsistent and should be thrown out.

There was speculation the league might go softer on Gordon following the public outcry after Baltimore running back Ray Rice was suspended for two games on a domestic violence charge. Instead, the league put Gordon on the sideline for all 16 games and will wait to see how he behaves before deciding whether to let him back.

Gordon didn’t help his cause with two legal issues as his case dragged on. He was charged with drunken driving after his arrest in Raleigh, North Carolina, on July 5. In May, he was stopped for speeding in Strongsville, Ohio, and one of the passengers in his car was cited for marijuana possession.

The talented 23-year-old led the league with 1,646 yards receiving last season despite being banned from the first two games for a failed drug test. It was his second known violation as a pro and Gordon said he had inadvertently taken codeine contained in a prescription cough syrup.

Gordon’s loss is a crippling blow to Cleveland’s offense, depriving the Browns of their best big-play threat. Pro Bowl tight end Jordan Cameron is now the team’s primary target, and he may find himself double-teamed and without open spaces to run routes now that Gordon is missing.

The Browns took a risk in selecting Gordon in the 2012 supplemental draft, forfeiting a second-round pick to take the speedy 6-foot-3, 225-pounder who failed at least three drug tests in college for marijuana abuse.

The team has vowed to do all it can to help and support Gordon. During training camp, owner Jimmy Haslam said the team never considered cutting him.

As he awaited word from the league, Gordon was noticeably different. He dropped passes and seemed detached during an exhibition game in Washington. Recently, he posted a photo on Instagram of himself on the practice field catching a pass from rookie quarterback Johnny Manziel. Gordon captioned the photo, “Only place I can find peace.”

It’s been taken away.

Gordon’s on his own.