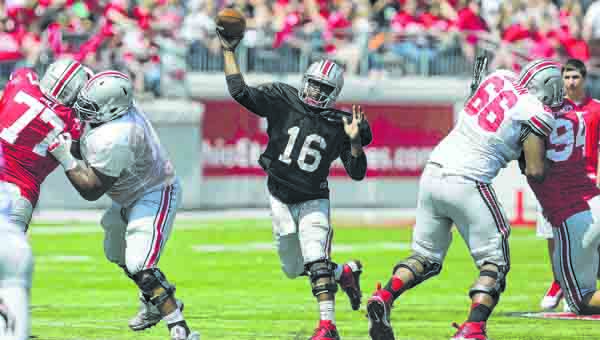 Redshirt freshman quarterback J.T. Barrett will be the main focus as the Ohio State Buckeyes open the season at Navy on Saturday. Barrett takes over for injured starter Braxton Miller who is out for the season.

COLUMBUS (AP) — There are a lot of ways to describe J.T. Barrett’s new, amplified role for Ohio State.

His teammates and coaches say Barrett has taken over as No. 5 Ohio State’s starting quarterback as if that were the plan all along.

It wasn’t, of course. Barrett, a freshman, got the job when two-time Big Ten player of the year Braxton Miller reinjured his throwing shoulder 10 days ago and was lost for the season.

Offensive coordinator Tom Herman, tongue in cheek, said the Buckeyes would try to keep things simple when Barrett starts his first college game on Saturday against Navy in Baltimore.

“We don’t ask the quarterback to be a rocket surgeon by any stretch of the imagination, never have and never will,” said Herman, who despite those words is a card-carrying member of MENSA, the organization for those with extraordinarily high intellects. “We might actually make a more conscious effort to keep it simple, but not a ton less than we already do.”

Quarterback? Yes. Rocket scientist? No. Brain surgeon? No. And definitely not a rocket surgeon.

Luckily, Barrett has met most other requirements of the job. Coach Urban Meyer says Barrett is doing a great job handling one of the highest profile jobs at the college level.

To illustrate the problems that a player in his first collegiate game can encounter, Meyer told a story about Alex Smith, who stumbled in his debut under Meyer at Utah in 2003.

“I’ll never forget Alex Smith couldn’t say the first play when I put him in against Utah State in the fourth quarter,” said Meyer, with a grin. “We were winning. We called the play and I said, ‘Alex, say that play back to me.’ He couldn’t say the play. I thought, I wonder if this guy will ever be any good.”

Smith became a No. 1 draft pick and solid NFL quarterback.

Meyer didn’t permit Barrett to speak with reporters this week, saying, “We’re going to let him go play a game and take care of business.”

But the rest of the Buckeyes have gushed about their faith in Barrett and admiration for how he’s prepared for this big moment.

“He’s a great leader. He’s super smart, he’s a hard worker. Everyone looked up to him even before this (Miller injury) even happened,” tight end Jeff Heuerman said. “He handles his business and does everything right. We have full confidence and trust in him.”

Miller accounted for 52 touchdown passes and 32 scoring runs in his three years as a starter. Instead of his 1,223 offensive plays under center, the Buckeyes’ top two quarterbacks now have a total of 19 plays, all by backup Cardale Jones.

Still, Herman feels good about both Barrett and Jones.

“I’m very confident,” he said. “J.T. has had an excellent camp. Cardale actually had his best week as a Buckeye. So I feel great. I don’t know that either one of them is the Big Ten player of the year, but I would think there’s a lot of schools that would take our scenario over what they’ve got.”

Meyer compares Barrett to the Buckeyes’ backup the last two seasons, Kenny Guiton. In 2012, Guiton took over for an injured Miller with less than a minute left with Ohio State trailing by eight points to Purdue. He led them down the field for a touchdown and tying two-point conversion pass. Then he guided them to the win in overtime.

A year ago, Guiton took over for almost three complete games when Miller was out with a sprained left knee. Guiton averaged four touchdown passes in the three wins.

Now Barrett will be expected to lead the team to wins while he gets some on-the-job training. Meyer isn’t worried the 19-year-old will be overwhelmed.

“He’s not someone you have to watch to see their demeanor because it’s the same as it was two weeks ago,” he said. “We all know what’s coming down the barrel at him, but he’s handled it very well.”

CINCINNATI (AP) — The Cincinnati Reds came up with a game plan to steal a game from Jake Arrieta, and... read more