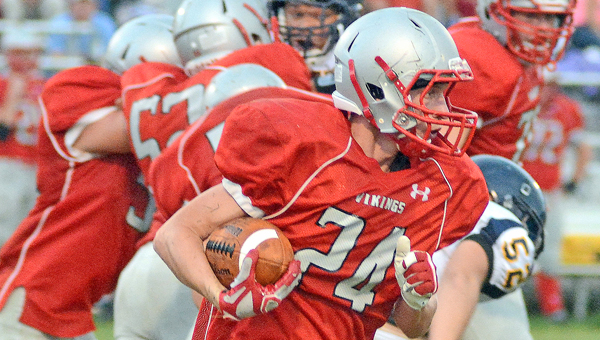 Defense: Lucasville is led by LBs Loop and Wolford.

NOTES: Look for a high-scoring affair. Coal Grove may have the advantage on the offensive and defensive lines and that could prove to be the difference.

QB: Gabe Marzicola is back for Rock Hill; Drew Scarberry (6-5, 180) is the son of Rick Scarberry who is a former head basketball coach at Rock Hill.

NOTES: Due to an unplayable surface at Northwest, this game will be moved to the Portsmouth High School field. The Redmen have a slight advantage since they play on field turf and Northwest plays on natural grass.

NOTES: Injuries have hampered the Dragons from the start. They lost tackle Tyler Campbell to a knee injury. RB Nathan Campbell dislocated his elbow last week and may miss four weeks. Short bruised his sternum. Meigs lost 46-13 to Coal Grove last week after leading 13-12 at the half, The Marauders had five turnovers that led to touchdowns.

RB: Alexander’s Josh Barnes ran for 145 yards on 23 carries last week, McGrath ran for 120 and Mason Chapman 57; SV’s Tanner Mays ran for 68 yards and returned a kickoff for a touchdown.

WR: Stiltner (2-25) and Brown (1-43) had all the receptions out of the backfield: Stephan Wagoner had four catches for 88 yards for the Pointers in last week’s 37-14 loss to Minford.

COLUMBUS (AP) — Without brawny Carlos Hyde and his 1,521 yards rushing, many Ohio State fans expected the worst out... read more