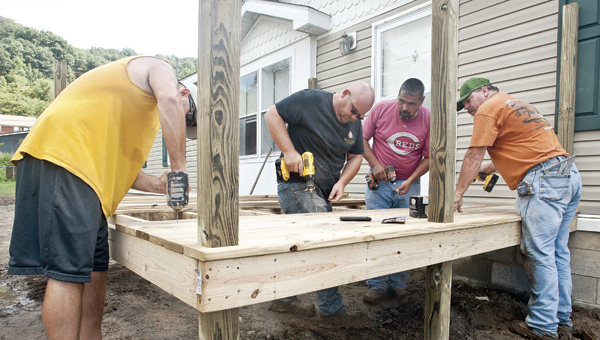 In May of 2013 a fire at the house at 619 S. Sixth St. forced a family out of their home and in with their relatives.

“They had to come live with me,” Tina Nelson said, referring to her grandchildren and daughter who lived in the home. “We’ve worked to get this house back into shape and up to state inspection codes but it’s been hard because our income is limited.”

Nelson and her family have held various fundraisers to try to raise the money and have received help from Christ Temple Church in Ashland, Ky. Still more was needed before Nelson’s family could return to their home.

But thanks to some volunteers from Scioto and Lawrence County the house is almost ready to be a home once again, more than a year and a half after the fire. Thomas Jefferson Davis, the Democratic candidate for the Ohio House of Representatives for the 90th District led a group of workers that included county commissioner hopeful Tim Edwards and county treasurer Stephen Burcham.

“The porch they are building is to make sure the house can pass specs,” Nelson said. “I told (Davis) I needed help and he’s been there to help me. The state inspectors are coming next week so hopefully the house will be ready.”

For Davis, extending a helping hand to Nelson and her family is something he feels is important to Ohio as a whole.

“We have to look after one another,” Davis said. “This is just a way to pay it forward and to take care of your community by helping take care of your neighbors. Sometimes people are down, for whatever reason and they need help. It’s not a hand out; it’s a hand up. I think that is where Ohio’s leaders have dropped the ball they’ve forgot to take care of their fellow Ohioans.”

Nelson said she’s happy to see the home heading toward completion but knows it couldn’t have been done without the help of people like Davis.

“So many people have pitched in to help out,” she said. “My husband’s best friend Richard Holston did all of our plumbing and electrical work. He also put in our heating and cooling system for free. So we’ve been lucky to have so much help from the community.”