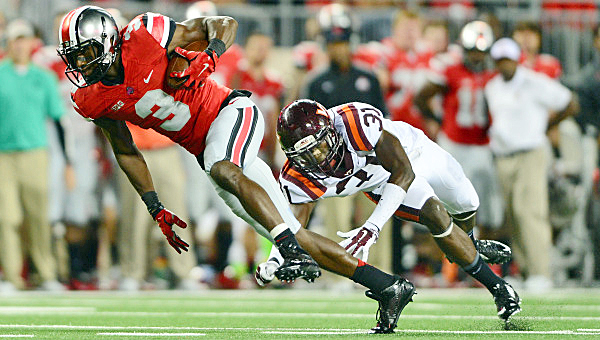 Ohio State Buckeyes’ wide receiver Michael Thomas (3) makes a catch and gets away from Virginia Tech Hokies’ cornerback Brandon Facyson (31) to score a touchdown during the third quarter at Ohio Stadium on Saturday night. The Hokies upset the No. 8 Buckeyes 35-21. (Andrew Weber – USA TODAY Sports)

COLUMBUS (AP) — Urban Meyer knows that if things don’t get better soon his Ohio State Buckeyes might just face more defeats down the road like the one they were handed in front of the biggest home crowd ever.

Michael Brewer passed for two touchdowns on Saturday night and Virginia Tech’s defense stood tough at the end as the Hokies stunned the eighth-ranked Buckeyes 35-21.

“I still have confidence that we have enough skill on this football team to get by people,” Meyer said.

He added: “It didn’t look like it (tonight). But we have to get by people or you’re going to see what you saw today every week.”

Keyshoen Jarrett had two interceptions and Donovan Riley returned another 63 yards for a TD in the final minute before a record crowd of 107,517 at enlarged Ohio Stadium.

It was a huge win for a Virginia Tech program that had lost 11 games the last two years and had gone from perennial juggernaut to a national afterthought.

Virginia Tech had talked all week about a spotlight victory to conjure up the program’s better days under Beamer, now 226-109-2 in his 28 years in Blacksburg, Virginia.

The Hokies definitely did that.

But Beamer wasn’t talking about a Hokies renaissance.

“I don’t know,” he said when asked if Virginia Tech had regained its national prominence. “We have to build on this win, learn from this win.”

The defense then stymied Ohio State quarterback J.T. Barrett, the freshman taking over for injured three-year starter Braxton Miller. Miller watched the game from the sidelines, his injured right arm in a sling.

Barrett, who looked solid in a come-from-behind 34-17 win over Navy last week, was just 9-of-29 for 219 yards and a touchdown with three interceptions. He led all rushers with 70 yards on 24 carries.

His line permitted seven sacks and he was hurried numerous other times.

But Meyer refused to point the finger.

“There are some weaknesses right now on our team and it was rather obvious what (they are),” he said. “We can play better on both sides.”

Brewer, meanwhile, handled heavy pressure all day while moving the chains. He was 23-of-36 for 199 yards and the two scores with two interceptions.

“He’s tough,” said fullback Sam Rogers said. “I have complete trust in him.”

It was Ohio State’s third loss in its last four games after a school-record 24-game winning streak.

They also handed the Big Ten a third embarrassing loss on Saturday night. No. 3 Oregon ran away from seventh-ranked Michigan State 46-27 and No. 16 Notre Dame pounded Michigan 31-0. The rest of the conference went 8-2 earlier in the day against a bunch of underdogs from smaller conferences.

After the final seconds ticked off the clock, the Hokies ran to their small section of enthusiastic fans near the closed end of the stadium, smiling, waving and hugging everyone they met.

“It’s not the last game of the season,” Ohio State tight end Jeff Heuerman said. “There’s a long way to go to finish out. Coach Meyer’s message after the game is there’s a lot to accomplish but we have to accomplish it at 11-1.”

The Hokies relied on coordinator Bud Foster’s tough, hard-nosed defense to shut down the Buckeyes at the finish.

Ohio State drew within a touchdown when Barrett tossed a short pass in the right flat to Michael Thomas, who spun and raced untouched the rest of the way for a 53-yard TD that left the Hokies up 21-14.

Then Brewer, who had stared down Ohio State’s vaunted front all night, got hit from behind on a scramble by end Joey Bosa and fumbled, with Rashad Frazier recovering at the Virginia Tech 15. Two plays later, Elliott took an option pitch around right end and broke three tackles, tying it at 21 with 11:40 left in the fourth quarter.

Virginia Tech took over at its own 35 after an Ohio State kickoff went out of bounds.

Deon Newsome went 22 yards on an end around and Rogers gained 17 more on a reverse on which he faked a pass and then picked his way downfield.

On second and goal from the 10, Brewer fired a low, hard pass to the outside for Hodges to put Virginia Tech up 28-21.

The Hokies never flinched when Ohio State made its run.

“Hanging our head is something we don’t do,” Jarrett said.

Riley put the icing on the win when he stepped in front of a Barrett pass and raced down the right sideline — and in front of the Ohio State bench — for the 63-yard score with 46 seconds left.

“I’m a little bit surprised. I thought our skilled guys would perform better, I thought we’d protect a little better,” Meyer said. “Coaches don’t get surprised, we get disappointed. Obviously, we’ve just got to work a little harder.”