Buckeyes settle for leftovers after loss 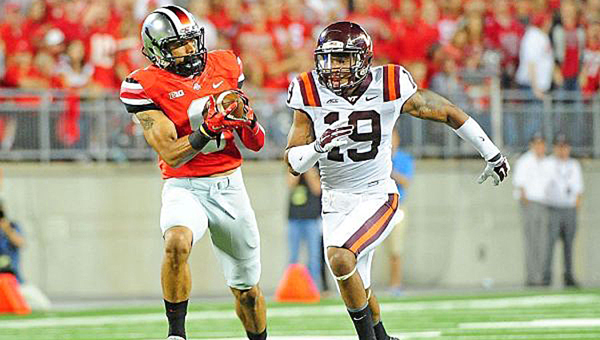 COLUMBUS (AP) — Every Sunday night after a win, Ohio State’s players and coaches get to enjoy a sumptuous buffet of steak, lobster or shrimp.

After a 35-21 loss at home to Virginia Tech, the menu was downgraded.

“We still ate dinner. It just wasn’t the same quality of food,” running backs coach Stan Drayton said, grimacing. “I don’t remember (what it was). I just remember swallowing something.”

For the record, the Buckeyes were fed spaghetti and mashed potatoes.

A lot has changed for the Buckeyes — beyond the cuisine — since suffering their first defeat in a home opener in 36 years and having a 25-game regular-season winning streak ended by the Hokies. It all played out before an Ohio Stadium-record 107,517 fans.

The switch in the menu was meant to send a message.

“That’s something that I don’t really enjoy and something I cannot get used to,” safety Tyvis Powell said of the meal.

A lot of things around the Ohio State team were hard to swallow this weekend.

The Buckeyes plummeted 14 spots to No. 22 in the latest AP Top 25 and head into a home game on Saturday with Kent State hoping to regain a degree of equilibrium since being thoroughly outplayed on both sides of the ball and on special teams.

“We’ve just got to move forward,” third-year head coach Urban Meyer said. “That was the first (loss) we’ve had during the regular season, so there is no victory meal for our players. I can tell they’re hurting. So we get to hurt the rest of the day (Monday).”

Meyer, his assistants and players all said the mistakes were minor, fixable errors. Yet there were glaring problems on the offensive line, at receiver and on defense. The young Buckeyes also missed two field goals, kicked off out of bounds and surrendered a long return.

Virginia Tech (2-0) had built a 21-7 halftime lead before a raucous, partisan Ohio State crowd. Then the Buckeyes came back, their defense forcing a couple of turnovers, to pull even at 21 early in the fourth quarter.

The Hokies took over at their 35 after walk-on kicker Kyle Clinton’s kickoff went out of bounds. A pass interference call, a run for 24 yards and a reverse for 17 more set up Michael Brewer’s 10-yard touchdown pass to Bucky Hodges with 8:44 left.

“When you talk about momentum changes, it’s absolutely a turning point,” Ohio State co-defensive coordinator Chris Ash said of Tech’s answering drive. “It’s a big part of the game. The stadium was alive, the team was juiced up on the sideline. We needed a stop to get the offense the ball back again. We had a couple of mistakes. That’s what it came down to. It had nothing to do with effort or calls that were made.”

The offense certainly did not respond, either.

Over its next 14 plays, freshman quarterback J.T. Barrett was sacked six times for 47 yards in losses, ran twice for 25 yards, threw two incompletions and was intercepted twice.

Virginia Tech put the game away on Donovan Riley’s 63-yard interception return in the final minute.

Now a team that a week ago was considered a strong contender to make the first College Football Playoffs field is trying to pick up the pieces.

“We’re still in that hurting mode,” Meyer said. “Just the pain and regret is phenomenal, and there is so much regret about things we could have done better to win that game.”

“We have to rebound,” he said.