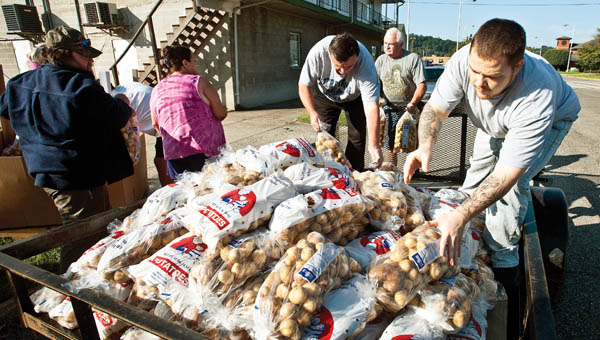 Volunteers with the Harvest for the Hungry food bank in Ironton, help load bags of potatoes into a trailer on Tuesday.

According to the Northern Plains Potato Growers Association, each American eats nearly 140 pounds of the starchy tubers each year. A tractor-trailer load of potatoes that was unloaded at Harvest for the Hungry in Ironton on Tuesday could feed 304 people for a year.

Twenty-one 2,000-pound pallets of potatoes were delivered from Wisconsin and were immediately divvied among local missions, churches and food pantries.

“We are keeping four or five here,” Diane Porter, director of Harvest for the Hungry, said. “These are such big pallets a lot of places don’t have a place to store them.”

The potatoes were acquired from Virginia-based nonprofit ministry Society of St. Andrew’s Potato and Produce Project, which has donated more than 19 million pounds of potatoes to Ohio and 683 million pounds nationwide since 1983.

Many of the pallets not being kept by Harvest for the Hungry have already been given to certain local missions and food pantries.

“There are still some up for grabs,” Porter said. “We usually give some to the Church of Christ and to First Baptist.”

Porter said she plans to parlay the potatoes into a fundraiser during a potato bar dinner at First Methodist Church on National Back to Church Sunday on Sept. 21.

“The potato bar will be $3 and take place after services on Sept. 21,” Porter said. “All proceeds go toward the pantry and everyone is welcome to come.”

On Saturday, Oct. 4, the pantry will have a fundraising yard sale in Hanging Rock. Anyone who wishes to donate yard sale items for the effort can drop them off at the pantry from 9 a.m.-noon on Monday or Wednesday.

In October donation letters will be mailed and on Oct. 25 a concert will take place at First Methodist. The concert costs $10 and proceeds go toward the pantry.

A seven-year employee of Woodland Cemetery who was recently fired has filed a wrongful termination suit against the cemetery’s board... read more