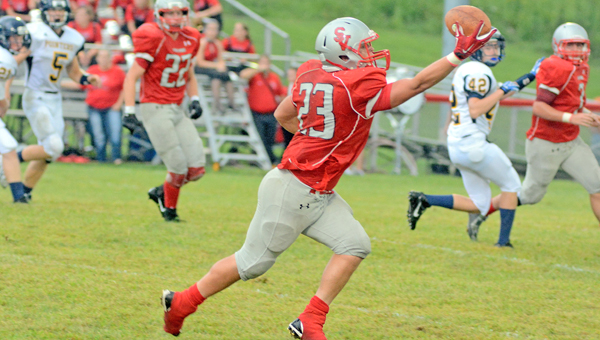 The date, the year, and the players’ names may change, but never the rivalry.

Things seem to repeat themselves each season when the Symmes Valley Vikings and Chesapeake Panthers renew their annual backyard brawl.

The Vikings (1-1) will visit the Panthers (0-2) Friday and both coaches know what to expect.

“It’s always a tough game,” said Vikings’ coach Rusty Webb. “These two teams aren’t strangers. It’ll boil down to which team can hold onto the ball and which team can execute because both teams know each other so well.”

Chesapeake coach Andy Clark has not only coached in the rivalry but he has been a player as well.

“I expect it to be a tight on this year. It almost always has been. I can’t remember the last time either one of us ran away from the other. I can remember a few years ago we had a game that went triple overtime,” said Clark.

Rivalry aside, the two teams will match running games as they try to gain some momentum for the rest of the season.

“I’ve seen them on tape and turnovers are what’s hurt them,” Webb said of the Panthers.

“Their offense is executing. When they hang onto the ball they’re a dangerous team. They have misdirection everywhere. You have to play assignment football.”

Clark said the Vikings like to run from their wishbone but they will use a few different formations to keep the defense off-balance.

“It’s the stuff you usually see from them. They’re not that big up front, but the come off the ball well,” said Clark.

“They get those big, long drives and keep the ball away from you. They attack the edges pretty well. Craft runs the ball pretty well. Mays is a big kid who is fast and he runs hard.”

Like in any game with closely matched team, turnovers will be a key.

“They’re not the big up front, but they come off the ball well,” said Clark. “Offensively we just have to execute. We haven’t done that. We can’t put the ball on the ground.”

Webb said turnovers are key, but the game may come down to which team plays the best defense.

“Defensively they’re very aggressive. And they’re very disciplined,” said Webb. “We don’t see that style of offense. Our defense has to hold them down and our offense has to generate some points.”