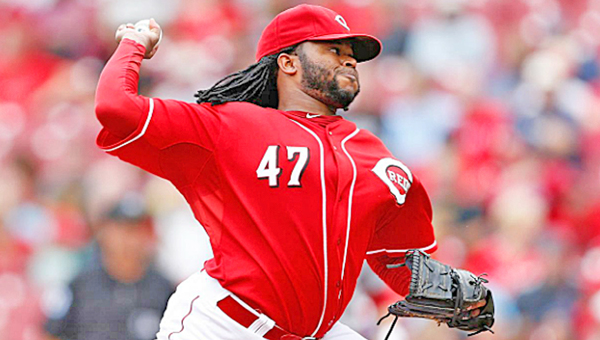 CINCINNATI (AP) — Johnny Cueto and the Reds are reduced to playing for pride and awards. Beating the Cardinals 1-0 on Thursday will be good for both.

“We created an environment where we play the spoiler,” Reds manager Bryan Price said. “There is no secret we’ve stuggled with the Cardinals the last several years. We’re trying to create momentum at the end of the season. We want to really feel good about how we finish up.”

Aroldis Chapman pitched the ninth for his 33rd save and third in the last three games.

Cueto (18-8) allowed just three hits and hit a batter to help the Reds win their second series in the last 13 against Central Division-leading St. Louis. The Cardinals have lost three straight for the first time since a four-game losing streak Aug. 26-30 and finished their eight-game road trip 4-4 after winning three out of four in Milwaukee.

Lynn (15-9) retired 15 straight before Brandon Phillips led off the eighth inning with the Reds’ first walk of the game. He went to third on Jay Bruce’s single to center field and scored on Ramon Santiago’s sinking liner to short center that John Jay got a glove on but couldn’t hold. Bruce had to hold up to see if the ball was caught and was forced at second.

“It increased the intensity,” Cueto said through an interpreter. “When he (Lynn) put up a zero, I wanted to throw up a zero. You keep doing that until someone scores. Thankfully we scored.”

The Reds have won three straight games for the first time since August 5-7 against Cleveland. They finished their home stand 4-3 after losing two out of three against the Mets.

Cueto retired the last 14 batters he faced after Adams led off the fourth inning with a single and was eliminated in a double play. He finished with seven strikeouts.

Lynn allowed three hits and a walk with six strikeouts in eight innings.

Bruce kept the game scoreless with a leaping catch at the right-field fence to rob Adams of a home run leading off the seventh inning. Adams appeared to doff his batting helmet to salute Bruce’s play.

“I always assume I can catch the ball,” Bruce said. “I just try to get back as soon as I can so I can time it. It was important to take advantage of Johnny’s performance and taking three out of four from these guys is huge for us.”

Cardinals: Catcher Yadier Molina got Thursday’s game off after playing all of Wednesday’s night game. Molina’s surgically repaired right thumb still is an issue, manager Mike Matheny said. “You can see the splint,” Matheny said. “He’s still protecting it and doing things to strengthen it.”

Reds: Catcher Brayan Pena was scratched from the original starting lineup with an illness. Devin Mesoraco started in Pena’s place.

Cardinals: Adam Wainwright starts as St. Louis opens a 10-day, nine-game home stand with the first of three against Colorado.

Reds: Mat Latos strives for his first career win at Miller Park as the Reds open a 10-day, nine-game road trip with the first of three at Milwaukee. Latos is 0-4 in six starts at Miller.

Cueto has three more starts to win two more decisions to win 20 games, if the Reds stay on schedule.

Cueto lost three straight decisions to the Cardinals over eight starts. It was his first win over them since May 14, 2011. Two of his three losses were 1-0 games.

Cueto’s seven strikeouts give him 220 this season, the most since Jose Rijo led the National League with 227 in 1993.

Jay was hit by a pitch for the 19th time this season, the most in the majors. He was plunked for the third consecutive game.

COLUMBUS (AP) — After this season, Ohio State only has two games scheduled against other teams from the state. Even... read more