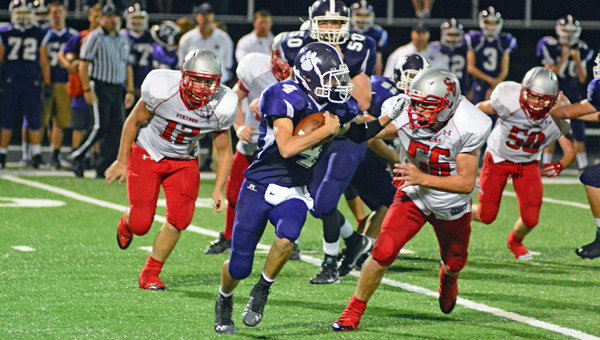 CHESAPEAKE — John Wayne wasn’t the only one who gave a performance with True Grit.

Trailing 18-14 with a little more than three minutes to play and 94 yards from the opposing goal line, the Chesapeake Panthers dug in and marched the length of the field in 11 plays to score with 28 seconds left and edge the Symmes Valley Vikings 21-18 on Friday.

Casey McComas hit Blake Ashworth with a 7-yard scoring pass to cap the drive as the Panthers picked up their first win of the season.

“They buckled down and played the way they could at the end. The offensive line blocked and every play but one was a run,” said Panthers’ coach Andy Clark.

“Our quarterback made the right reads and ran the option well. We didn’t make any mistakes. I can’t remember another time we’ve gone that far to win a game.”

The Vikings (1-2) must have felt they were watching a replay of last week’s 21-12 loss to Alexander. They controlled the clock and had long drives that failed to produce any points once again.

“Our kids played extremely hard,” said Vikings’ coach Rusty Webb. “We need to learn to finish long, sustained drives. That’s two weeks in a row we’ve done that. We need to cut down on the penalties.”

The Vikings went 78 yards on six plays capped by Blake Bowen’s 31-yard field goal to begin the second quarter and it was 3-0.

McComas came up with an interception and returned it to the Vikings’ 17. Maccoy Brown scored on the next play and Wesley Stephens’ kick put the Panthers ahead 7-3.

Symmes Valley answered with a 48-yard, five-play march that resulted in a 37-yard touchdown pass from Derrek Smith to Collin Webb.

Smith had one of the finest passing games in Vikings’ history as he completed 14 of 21 passes for 257 yards and a touchdown. He was intercepted twice.

“Their quarterback threw the ball on target and we’re a little young and inexperienced in the secondary,” said Clark. “We got some guys back this week we didn’t have and we just played better. That was probably our best week of practice in two years and we played the way we practiced.”

The Vikings went 55 yards in eight plays on the first possession of the second half with Webb running 2 yards as they went back in front 16-14 with 8:29 on the clock.

A bad snap out of the end zone on a punt by the Panthers resulted in a safety and the Vikings were up 18-14 with 6:28 to play.

But Chesapeake put together its long, game-winning drive and then intercepted a pass on the Vikings’ final possession of the game.

Symmes Valley finished with 94 yards rushing and 351 total yards to 193 for the Panthers.

Jim Walker jim.walker@irontontribune.com   AMANDA — It was a matchup between two tradition-rich programs and physical running games. But in... read more