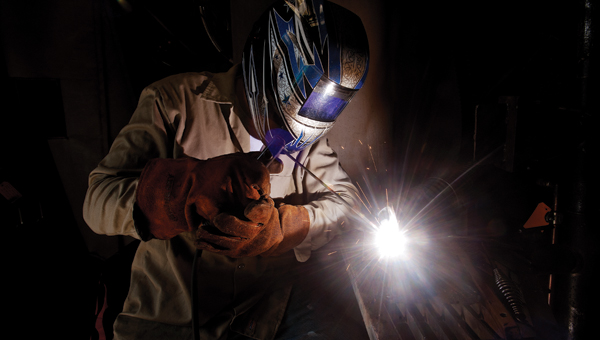 A ball of white light illuminates from the end of a welding torch while students practice welding techniques.

SOUTH POINT — Brandon Irvin hunches over a workstation inside a doublewide trailer on County Road 1.

Picking up a long, slender tube of metal, he loads his welding torch. Flipping down the protective mask of his safety helmet, Irvin fires up and sparks shower down creating a kind of nimbus over his head reminiscent of sparklers on the Fourth of July.

Irvin thinks he is practicing a skill he is working hard to master. He is. But he is also changing the face of the educational system in the United States. He is part of a revival of the trade education, which he hopes can turn into big bucks for him down the road.

“It is a good time to get into a trade school,” Irvin, of Huntington, W.Va., said. “There was such a push before to go to a four-year school. But there is a need for trade school skills.”

About five weeks ago Irvin joined the welding program of the Ohio Strategic Center headquartered at the Lawrence Economic Development Corporation.

The shortage of welders started plaguing U.S. employers six years ago when there was a need for a quarter of a million of the skilled workers. Four years ago jobs for welders and in related fields jumped to more than 300,000 jobs, according to the U.S. Department of Labor.

That’s what the former pizza delivery man is counting on, who got into the program after seeing yard signs throughout the Tri-State advertising the school from a partnership the center has with the LEDC, Lorain County Community College, Ohio University Southern, Engines Inc., McGinnis Inc., Superior Marine Inc. and Liebert Inc.

“I wanted to get certified in something that I could actually get a job in,” Irvin said. “There should be a lot of jobs. It is hard, but once you get the hang of it, it is really not too hard. I picked it up pretty fast. One of my grandfathers was a welder. Maybe it is in my blood.”

That nationwide shortage is just as strong in Lawrence County where major employers are willing to pay above-average wages for those who have the right stuff.

Forty to 50 percent of the work done at McGinnis Inc., just down the road from the school’s trailer, is welding.

“We need welders who have a good work ethic, can pass a drug test and show up to work,” Rick Griffith, president of McGinnis, said.

About a decade or so ago, with manufacturing jobs going overseas or at least out of the country, educators started the push for high school grads to go to college.

“We were acting on the data we had at the time that if you want a good job, you have to go to college,” Dr. Scott Howard, director of the strategic center, said. “Now we are beginning to see a resurgence of manufacturing jobs. We know the average age of a welder is around 54 and climbing. We have a skills gap in training because we were telling kids to get a four-year degree and not putting enough people in the pipelines. We didn’t train the next generation. It is a bit of a crisis to try to help our business partners to fill the training gap.”

Welders at McGinnis can start out at $13 to $18 an hour and those figures are competitive with wages across the state.

According to Salary.com the median salary for a beginning welder in the Dayton and Columbus area is $35,009 with the top wages exceeding $45,000.

And as McGinnis workers with 30 to 40 years at the company repairing barge and towboats face retirement, finding their replacements may not be easy.

“It is different with kids nowadays,” Griffith said. “Our type of work is working outside. A lot of kids grow up inside the house. When we were young, we were always outside.”

Seeing a healthy paycheck on the horizon drives Seth Cowgill, a classmate of Irvin’s, who was sealing parking lots in Wheelersburg before he signed up for the nine-month course.

“There are all kinds of jobs for welders, especially in our area, and I wanted to get involved and make a good living,” Cowgill said. “There is all kinds of money.”

The 26-year-old may have had three welders in his family, but that was as close as he had ever gotten to the sparks and heat until he started the course.

That’s what comes from a class of eight.

“(The instructor) can sit and watch what I am doing wrong and right,” Cowgill said. “If there are too many people, you get less time. They run it like it is a job. They expect you to show up on time. They get you ready for the workforce.”

Having one of the three instructors — Pete Lambert, Brett McGraw or Rick Stringer — by their side is a plus. But an even bigger plus is the computer-directed RealWeld system on which students can practice.

As soon as a student picks up his welding torch, the computer calls out a critique: “Angle down. Go faster. Angle right.”

Any motion made with the torch is tracked with the system and gives out a score once the job is finished.

“This is to produce more job-ready graduates,” Bill Forquer, CEO of RealWeld Systems of Columbus, said. “It is almost like having a welding instructor hoving over your shoulder. If you are training alone, you may be practicing the wrong way unknowingly.”

As he takes a break from melting steel into metal plates, Irvin admits the heat that comes from working with a torch that can get up to 4000 degrees Fahrenheit was hard to get used to at first.

“You get adjusted,” he said. “The payout is worth it. This is one of the best decisions I have ever made.”

For more information on the welding school, contract Dr. Scott Howard at 740-377-9876 or check out the website at www.ohioweld.com.

I had never been to New York City, so a few years ago when I took a road trip to... read more