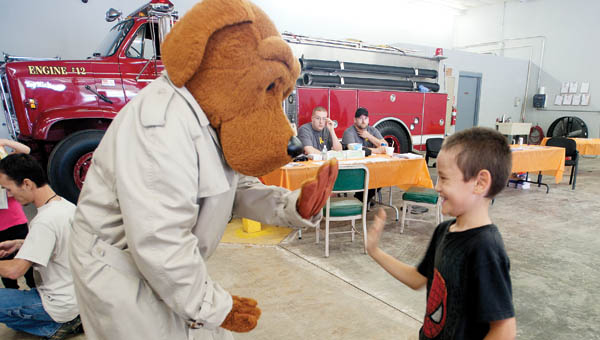 HECLA — With a 2-mill operating levy on the November ballot members of the Upper Township Fire Department hosted a “Community Day” to show support for the community and garner support for the levy.

“We want to show the people in the community we support them and we want their support,” J.D. Pancake, chief of the Upper Township Fire Department, said. “Without the voters’ support of the levy we simply could not operate.”

Many agencies, groups, businesses and organizations had booths at the event such as Backpack Buddies, Air Evac Lifeteam, Sunset Nursing Center, the Lawrence County Sheriff’s Office and the Head Start Program. Free hot dogs and beans were given away and M&M inflatables donated a jump house for children. The fire safety trailer was also in operation.

“There are some people who think a mill means a million,” Pancake said. “I’ve heard people say we are sitting here with $3 million in the bank and nothing could be farther from the truth. The doors here are always open if anyone ever has any questions.”

The 2-mill levy costs taxpayers less than $20 per year, Pancake said, and the purpose of “Community Day” was to show that the levy is not a waste of money.

“All day we have had people dropping off donations,” Pancake said. “We are always taking donations and we use that money toward our operating expenses and to buy new equipment.”

McMahan also stressed the importance of donations with regard to the day-to-day operations of the department.

“We have small fundraisers throughout the year,” he said. “We have a TV and a couch in our office here in the building and all of that was donated. If it wasn’t donated, we wouldn’t have it. It’s as simple as that.”

Much upkeep required for pump stations

When heavy rain comes down in Ironton, the city’s pump stations get to work. What many residents never see is... read more