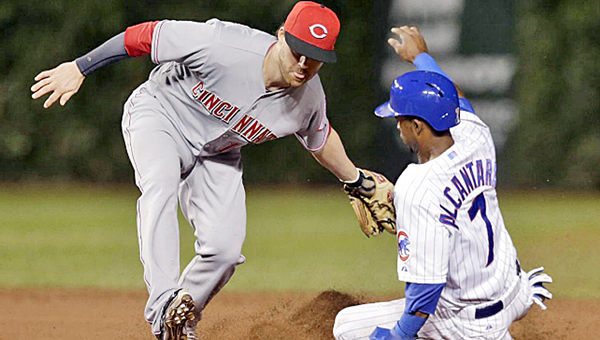 CHICAGO (AP) — The Cincinnati Reds held Anthony Rizzo in check all night — until the ninth inning.

That last at-bat was the difference in the game as Rizzo homered off of Pedro Villarreal to give the Chicago Cubs a 1-0 victory on Monday night.

Rizzo had missed 18 games due to a back problem, but he drove a pitch from Villarreal (0-1) over the wall in center field. Rizzo’s 31st homer of the season gave Hector Rondon (4-4) the win after he pitched a scoreless inning of relief.

Travis Wood didn’t get any run support and couldn’t earn his ninth win despite producing one of his best outings of the year. Wood threw six scoreless innings, allowed only three hits, and lowered his ERA to 4.86.

“It would’ve been nice to have a cushion, but it was two really well pitched games,” Reds manager Bryan Price said. “Woody did a terrific job and their bullpen came in and didn’t give us a lot of opportunities with a lot of mistakes. We pitched almost as good.

“It was a mistake that Rizzo took advantage of. He looked a little rusty the first couple at-bats and then he had (an) infield hit. He certainly is always a dangerous hitter.”

It was Rizzo’s first game since Aug. 26th.

“He hasn’t had the luxury of actually going out on a rehab assignment and seeing live pitching again in terms of game-type situations,” Cubs manager Rick Renteria said. “He certainly made the adjustment in his last at-bat.”

Simon gave up five hits in seven innings. The Reds right-hander, who is 3-0 against the Cubs this season, was a pleasant first-half surprise but had been struggling recently.

“This is my first season with the Reds to be a starter and I want to show them I can be a starter for a real long time here,” Simon said. “I try to finish strong.”

Until the ninth, the Cubs didn’t do much at the plate even though they had Rizzo and Jorge Soler in the lineup together for the first time.

Soler went 1 for 3 after he missed a weekend series in Pittsburgh due to the birth of a child.

Simon might have earned a win if Cubs center fielder Arismendy Alcantara didn’t run down Kristopher Negron’s drive to right-center with two outs in the eighth when speedy Billy Hamilton was on first.

“The ball that Negron hit, he absolutely crushed that ball out to right-center,” Price said. “Alcantara made a great catch.”

The Cubs loaded the bases against Simon in the first inning on two singles and a walk. Welington Castillo popped out to end the inning.

Cincinnati got its first scoring chance in the third, starting the inning with a single and a walk, but Negron flew out to right.

“We tried to create scoring opportunities, but they just wouldn’t give in,” Price said. “Disappointing to lose, but we certainly didn’t give the game away.”

Reds: 1B Joey Votto took infield during pregame warmups but didn’t take part in batting practice. Votto (left quadriceps) hasn’t played for the Reds since July 5 but took underhand flips in a batting cage on Sunday.

Reds: RHP Johnny Cueto and Cubs RHP Jake Arrieta will face off on Tuesday. Cueto (18-8) will attempt to match Dodgers LHP Clayton Kershaw for the most wins in baseball this season. Cueto is 5-1 with a 1.84 ERA in his last nine starts against the Cubs. Arrieta (8-5) leads the Cubs with a 2.82 ERA.

Recent call-ups SS Jake Elmore, RF Yorman Rodriguez and LF Jason Bourgeois were in the lineup as part of a look-see for some of Cincinnati’s younger players. “This is a great opportunity for them to play and for us to get a little more evaluation time before spring training in 2015,” Price said.

Buckeyes get extra week to prepare for Bearcats, Kiel

COLUMBUS (AP) — If any naive Ohio State football players had a notion that they were getting this week off,... read more