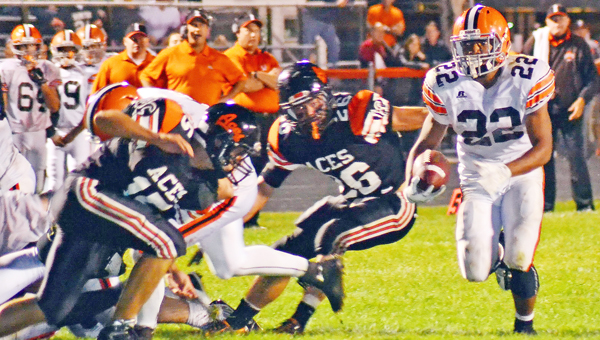 The Ironton Fighting Tigers lead the series with the Ashland Tomcats 44-31-3 but the home team has won the last six meetings including Ashland 42-20 last year.

Ironton will try to continue the trend Friday when they host the rival Tomcats in the first official game on the Fighting Tigers’ new artificial playing surface.

Ironton is 2-1 after beating Amanda Clearcreek 34-23 last week. The Fighting Tigers stopped Russell 36-9 two weeks ago after losing their opener at Wheelersburg.

Ashland (1-2) lost to Russell 29-27 in overtime last week and suffered a 27-26 last-second loss on a kickoff return at George Washington the previous week.

In the loss to Russell, Ashland had the ball on the 1-yard line at the end of the first half but ran out of time.

Ironton coach Mark Vass was quick to point out that comparing scores didn’t work in this rivalry.

“Ashland and Russell are rivals much like we are with Ashland,” said Vass. “Last year we beat Russell 35-14 and Ashland beat Russell only 7-6 and then beat us. We know it’s going to be a tough game to win. Ashland’s two plays from being undefeated.

The Tomcats’ are led by speedy junior running back Quinton Baker (5-9, 185) who has already give a verbal commitment to the University of Kentucky.

Last season Baker ran for 228 yards and four touchdowns against Ironton. His scoring runs were 96, 40, 49 and 5 yards.

“He’s dangerous. He’s a threat to go the distance at any time. We saw that last year,” said Vass. “But they have some other weapons, so you can’t just put all your focus on one player.”

Junior Jake Long (6-1, 180) was the wingback but his playing status is questionable due to an injury last week.

But Vass said Ironton’s offense will be faced with the task of cracking Ashland’s defense.

O’Bryan plays the strong side linebacker to lead the defense. He is joined at linebacker by junior Chase Goble (6-0, 205) on the inside with senior Brandon Caines (6-0, 180) and Sutton on the outside.

Across the defensive line will be senior Kyle Cole (5-8, 205) and junior Jay Layne (5-10, 185) at the tackles with Broughton and junior Dylan Blevins (5-11, 210) at the ends. Cline will shift back and forth from linebacker to defensive line.

Senior Brandon Caines and Long — if he can play — are the corners with Gilliam and junior Bradley the safeties.

Ironton will dedicate its new artificial playing surface at Tanks Memorial Stadium prior to Friday’s game against Ashland. A ribbon... read more