GrandMahl and Sons: 3 generations of Mahlmeisters officiate football game together 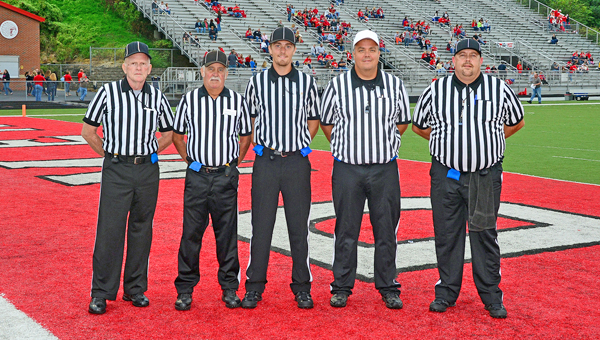 To the crowd on hand, it looked like any other officiating crew. To the crew itself, it appeared to be more like a genealogy search.

When Oak Hill played at Rock Hill last Friday, the officiating consisted of a rare circumstance: three generations of officials working a game together.

Jim Mahlmeister has been in a crew with sons Mike — a.k.a. Moose — and Jimmy since 1993. But on Friday, a third generation joined the crew when Jimmy’s son, Justin, called with his father and grandfather along with Chuck Price and Larry Chinn.

Mike and Jimmy joined their father in both started when they were about 20, ironically Justin’s age.

“Mike joined first. He came on my crew when I was with Joe Swarts, Ralph Davis, Rusty White and Bill Rapp,” said senior Jim. “Mike came in the early 90s and Jimmy right after that. He came in on the same crew when Rusty quit. When (Swarts) finally quit, we all had our first game in the mid-90s.”

Justin is a 2013 graduate of St. Joseph High School and has been attending Shawnee State University where he plays goalkeeper for the Bears’ soccer team.

He is in his sixth season after taking the officiating class from his father as a freshman in high school and then began working youth league games.

Justin said the initial feeling about working with his father and grandfather wasn’t much different than sitting around at the dinner table or watching a game on TV. But he admitted those emotions began to swing during the game.

“At first it was more like just being with those guys even though I’m the youngest. I was really just excited to get into it and officiate my first varsity game,” said Justin. “When I first walked out onto the game I was jumping around.”

Justin’s dad said he really didn’t see any difference in everyone’s approach to the game or their performances.

“Honestly, it was business as usual during the game. Justin did a good job and there were no issues,” said Jimmy. “I spent a little time before the game making sure to answer all of Justin’s questions so pre-game was a little different, but not much.”

Grandpa Jim said he didn’t really offer any special advice to his grandson, much like the approach he took when his sons joined the crew.

“I didn’t really have much advice (for my sons). I really wasn’t that far into it (career-wise). They took most of their advice off Ralph and Joe. I didn’t start until the 80s. I coached St. Joe through the 70s,” said Jim who worked his first game in 1982 when Coal Grove played at Greenup County, Ky.

But grandpa admitted he had a special feeling about his grandson.

“I was thrilled to death. He did real well. He made two extremely good calls. He was the back judge and he didn’t come up and talk. I was proud of him,” said Jim who noted that grandma Wanda Mahlmeister was also on hand to watch the rare officiating feat.

Justin said he was ready to ask for advice if needed, but he admitted it was relaxing to work his first varsity game with members of his family.

“If I have a question with my positioning, I’ll ask. It was really different to walked to the middle of the field for the coin flip and meet your dad and grandfather,” said Justin.

“It made me feel a lot better having them there. Being with a random crew, they would expect you to know everything. I feel a lot more comfortable to ask them a question and if I mess up they can help me correct it.”

As it turned out, Justin more than held his own. He had one play when he raced down the field on a long run by a player who was tackled just short of the goal line.

“Me and Larry Chinn ran 60, 70 yards and the runner got tackled inches from the goal line and (dad and grandpa) were really complimentary because I didn’t just give them the touchdown because he rolled into the end zone,” said Justin.

“Then someone made an interception and he went to one knee at the one and he tried to fall back into the end zone for a touchback. They said, ‘you made your call and stuck with it.’ They said those were super calls.”

The fact Justin decided to become an official was no surprise to anyone including Justin.

When Justin was 5-years old he began going to games with his father. He would shoot basketball in the gym during pre-game but then stay on the sidelines with the chain crew during the game.

“I remember my dad holding me at an Ironton game. He told me stories about their experiences. I traveled with him to every game and stayed with him the entire game. I always wanted to be a ref,” said Justin.

Like his father, Jimmy was proud of his son’s debut. However, he thinks there will be a repeat performance because his youngest son, Jimmy, 12, is following in his older brother’s footsteps.

“All in all, it was a great experience because I knew how excited Justin and Dad both were,” said Jimmy “Plus, I was glad that (youngest son) Jimmy got to experience it as well because he idolizes Justin and wants to be like him.

“(Youngest) Jimmy was in the locker room and that was a huge deal to him. He wants to officiate when he is old enough. Some day we may all call as a five-man crew. How many grandfathers who are 72 years old can run and keep up with the young kids?”

This is one family tree that keeps branching out with whistles instead of leaves.

Jim Walker jim.walker@irontontribune.com   They do the same thing, they just use a different plan. Both the Coal Grove Hornets... read more