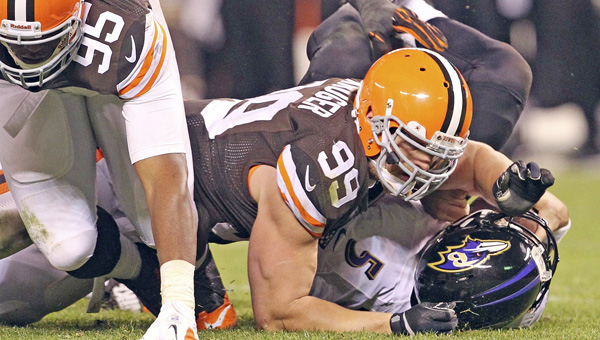 It’s about the only thing that shined for him in his first season with the Browns.

Signed to a five-year $40.5 million contract as a free agent, Kruger was a major disappointment last year for the Browns, who were counting on the pass-rushing linebacker to record sacks, make big plays and generally disrupt offensive backfields the way he did for the Ravens.

He’s doing it all now.

Kruger’s off to a flying start through two games this season, recording two sacks, eight tackles — three for loss — and being credited with a pass defensed.

He’s played well against the run, considered the weakest aspect of his game, and Kruger has been a vocal leader on and off the field for the Browns (1-1).

Now in a defensive system that seems catered to his strengths, Kruger is flourishing.

“Paul has not only played well, he’s elevated the play of the guys around him,” Browns coach Mike Pettine said.

“I hear him in the locker room, I hear him on the sideline. He’s just not all talk, he’s backing it up as well.”

Kruger has been a pet project of Pettine and defensive coordinator Jim O’Neil. Cleveland’s defensive scheme places a premium on creating mismatches. By moving Kruger inside and out, the Browns have been able to get the 6-foot-4, 270-pounder, who was asked to drop into coverage last season, in one-on-one situations against linemen or running backs.

To this point, Kruger has won the majority of those matchups.

In the first quarter of last week’s win over New Orleans, Kruger helped Cleveland’s defense set the tone when he stormed in from the edge and sacked quarterback Drew Brees at the 1.

Later, Kruger got to Brees again, just as the QB released the ball, forcing it to sail over tight end Jimmy Graham and to Browns safety Tashaun Gipson, who returned the interception 62 yards for a touchdown.

This is the Kruger the Browns remembered racking up a career-high 13 1/2 sacks — including two in the Super Bowl — for Baltimore in 2012, not the one who had only 4 1/2 sacks last year.

Kruger credits some of his early success to Cleveland’s system.

“It’s a combination of things,” he said. “It’s definitely being in the right system and being put in situations where you have opportunities to be a huge part of the game.”

“He worked really hard in the offseason,” O’Neil said. “I don’t know if you want to say he had a down year or not, but he wasn’t happy with his year last year. He wanted to make sure that that didn’t happen again this year.”

So far, Kruger has been a dominating presence, an almost complete reversal from 2013.

He spent the offseason working on his explosiveness, getting off the ball more quickly to get past a tackle and then on to the quarterback. He refined his technique and he’s now seeing the benefit of extra hours spent in the gym.

Kruger won’t admit to feeling different and attributed some of his success to his teammates.

“There’s been so many guys on defense flying around, making plays and putting themselves in good positions, things are just going to open up for some guys,” he said. “Luckily I’ve been one of those guys who has been able to make a couple of plays.”

He’ll be facing his former team again Sunday, but Kruger isn’t looking for any revenge against the Ravens, who decided not to re-sign him.

“At some point you have to understand what kind of business you’re in,” he said. “It’s a very personal situation, but sometimes you have to understand it’s not a personal thing. And even if it is, who cares? For me, I let it go pretty quick. I still have positive feelings for everybody, it was a great organization to play for, I really had an all-around positive experience there and really grateful for the opportunity they gave me. But having said that, I’m just as grateful to be here and looking for the future.”

NOTES: TE Jordan Cameron (shoulder) and LB Barkevious Mingo (shoulder) practiced again, this time in pads, and could play Sunday. Pettine said he’s “cautiously optimistic” about Cameron, who sat out last week. … Browns offensive coordinator Kyle Shanahan said the package of plays for rookie QB Johnny Manziel will “always be an option throughout the year.” … Pettine never looked at the Browns’ first three games — Pittsburgh, New Orleans and Baltimore — as daunting. “That’s for the fans and media to do,” he said. “We wanted to build a plan to be 1-0. You look at the schedule, but it’s never, ‘OK, win here, loss here.’ You can’t do that in the NFL.”

Dalton perfect so far for Cincy