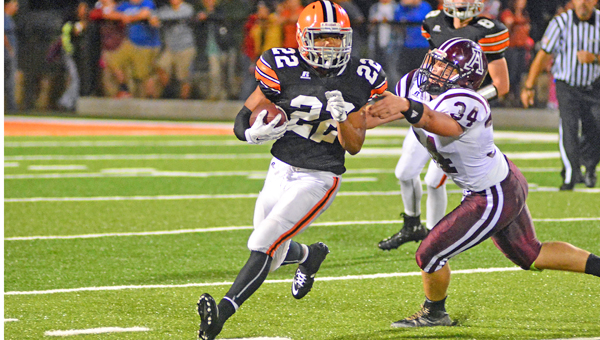 Ironton Fighting Tigers’ junior running back D’Angelo Palladino (22) runs past Ashland’s Cody Cline (34) as he gains some of his 270 yards in a 41-13 win on Friday. (Kent Sanborn of Southern Ohio Sports Photos)

A ribbon cutting ceremony prior to Friday’s game was symbolic of opening the door to Ironton’s new field turf playing surface.

It could have easily been symbolic of the opening of the floodgates to what was the Fighting Tigers’ running attack.

Ironton (3-1) amassed 532 rushing yards including 270 yards and two touchdowns on 21 carries by D’Angelo Palladino as the Fighting Tigers cruised past the Ashland Tomcats 41-13.

“Running behind them (the offensive line) makes it so much easier,” said Palladino.

“They’re stacked in the box. If they miss (Palladino) can go. That’s the great part of having that kind of threat. You miss, you pay,” said Ironton coach Mark Vass.

Palladino tipped off what was about to develop when he christened the new turf by running 73 on the first play from scrimmage to the Ashland 2-yard line.

Fullback Jeremy Bodmer scored on the next play and Luke Kelley’s conversion kick made it 7-0 just 22 seconds into the game.

“On the first play and the sideline play (end of the half), I had room,” said Palladino. “The hole was there and I hit it. I wish I would’ve scored on that first play. I was mad about it. I was a little out of synch.

“We’re coming on. People put us down some last year, but tonight we showed what we had.”

While the offense was carving up the defense like a Thanksgiving turkey, the defense was shutting down the Tomcats’ offense and stellar running back Quinton Baker.

But led by linebackers Desmond Young and Bodmer — neither played in last year’s game due to injuries — along with defensive linemen Caleb McKnight and Andrew Barker the Ironton defense limited Baker to 58 yards on 13 carries.

“Defense won the game. That was the key. We had to contain Baker. We talked about it all week. He’s a good ball player,” said Vass.

Ashland (1-3) got to the Ironton’s 35 but Bowling tackled Baker for a 10-yard loss on a pass play on fourth down.

Four plays later Ironton scored on a 39-yard keeper by Cox and it was 14-0.

“The offense blocked great,” said Cox. “Our defense played well. We knew coming in they had a good runner. The whole week we worked on defense.”

The Tomcats drove 65 yards in six plays on their next possession with quarterback Hunter Prince keeping the ball for a 27-yard scoring run and it was 14-7.

But a 53-yard run by Price got Ironton to the Ashland 5 where Palladino scored to make it 21-14.

The Fighting Tigers began a drive at the end of the first quarter that spilled over into the second quarter with Barker scoring on a 10-yard run and it was 27-7 with 11:28 left in the half.

The only chinks in Ironton’s armor were fumbles. The Fighting Tigers lost the ball three times — twice in the second quarter at the Ashland 27 and 31 — and each time they stopped apparent scoring drives.

“The offense did well. We controlled the line of scrimmage. It was a lot of both together,” said Vass. “Our backs were blocking and running for each other. This is a very unselfish group.”

Ironton got the ball back with 1:20 to go in the half and looked to run out the clock, but on third down Palladino broke several tackles and raced down the sideline 65 yards for a touchdown as the clock hit zero. Kelley’s kick made it 34-7 at the break.

The Fighting Tigers fumbled the ball away on the Ashland 25 in the third quarter, but a late drive covered 74 yards in nine plays culminating on a 29-yard run by Cox on the first play of the fourth quarter.

Symmes Valley Vikings’ Cameron Meadows (29) fights for some extra yardage after catching a pass during Friday’s 19-12 win over... read more