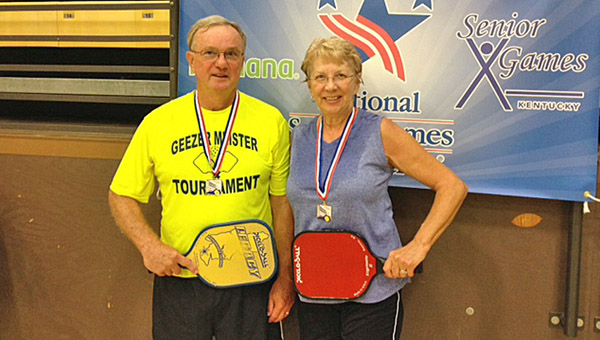 During each stage of his life, Randy Lilly seems to find a way to win a state championship.

In his younger days, he was a member of an Ironton slowpitch softball team that won an Ohio state championship.

About 10 to 12 years ago he won two Kentucky state titles in tennis.

Now, with the help of his wife Gena, Lilly has another state title.

The Ironton couple teamed up to win the state pickleball championship in the 60-64 age division at the Kentucky Senior Games held Sept. 4 in Frankfort.

Lilly started playing seven years ago when they would travel to Florida.

“I played occasionally for three years and then I started to play regularly the last four years,” said Lilly.

“Gena quit about a year and a half ago and didn’t pick it up again until May. We played some real good people the last two weeks before the tournament and it really helped get her ready. She played well.”

“We played the tournament in one day. It was tough. I didn’t play for two weeks after that because my knees hurt so bad,” Lilly said with a chuckle.

The Lillys beat Jim and Vicky Centrell of Kentucky, Gary Evans and Nancy Ringhiser of Ohio, and Dan Dyer and Janet Winslow of Tennessee in both the semifinals and the championship match after they came out of the loser’s bracket.

Pickleball is a combination of ping pong and tennis on a badminton-size doubles court.

Pickleball has been the fastest growing participation sport in North America over the past seven years.

Lilly said interested people can play three days a week at the Ashland YMCA or the Ashland Tennis Center.

In fact, Lilly said a pickleball league has recently been started in Portsmouth.

“I’d like to get some awareness out there and get something started here in Ironton,” said Lilly. “It’s a lot of fun. Anybody who wants to learn how to play, just give me a shout.”

Bengals try to keep on rolling