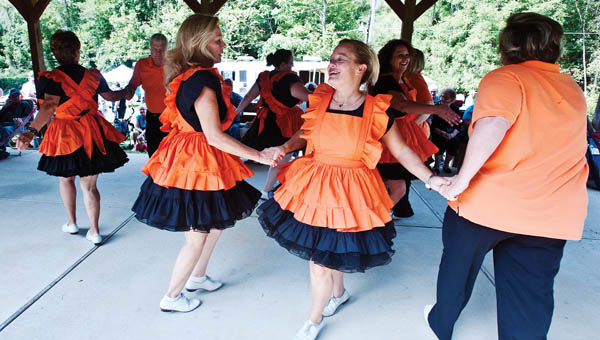 The Lincoln County Cloggers perform at the annual festival in South Point.

SOUTH POINT — For the first time in 16 years there was no sorghum making at the Sand Road sorghum festival. But that didn’t dampen the enthusiasm of the crowds who came for that old-time bluegrass music.

“South Point has such sandy soil,” Ivan Smith, festival co-founder along with Bill Enyart, said. “There comes a hard rain and down the cane goes.”

That’s what happened last year when half the sugar cane crop was lost to wind and rain cutting out much of the sorghum production. But that didn’t mean there wasn’t any of the sweet gooey stuff, good on biscuits, waffles or right out of the jar.

Organizers traveled 700 miles to Scottsville, Ky., to buy 48 gallons of sorghum from the Amish.

Beside the sorghum the members of the Order of the Eastern Star from Proctorville showed up at the festival site just as dawn was breaking to stir and stir and stir up homemade apple butter.

Along with the Eastern Star was Dan Fulks cooking up his special recipe for cornbread and beans.

Right about noon the crowds started coming in to hear an afternoon of bands.

“I pick bluegrass, guitar and sing,” Smith said. “I know most of the bluegrass people.”

And it’s the bands that draw, Smith said.

“People come to hear the music,” he said. “They have a good, fun day. It’s for the families.”

Ironton Fighting Tigers’ junior running back D’Angelo Palladino (22) runs past Ashland’s Cody Cline (34) as he gains some of... read more