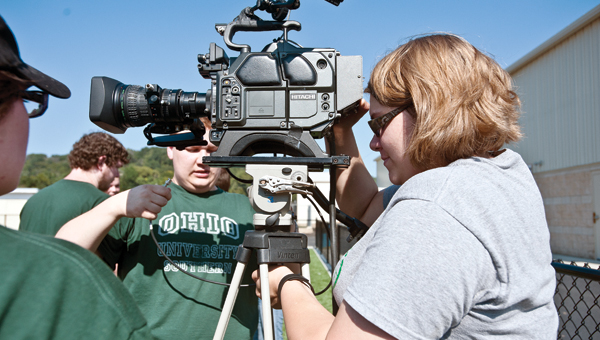 It was just after 2 p.m. on Friday when the Ohio University Southern film students arrived at Tanks Memorial Stadium. They weren’t there as fans, although some probably are, but as students preparing to tape the Ironton Fighting Tigers versus Ashland Blazer football game.

The students were there to set up equipment in preparation for filming the game.

OUS broadcast and electronic media director Don Moore said usually around 15 students in his department film games in Kentucky and Ohio, and those games are broadcast on a delay five times a week.

“Broadcasting the games gives players, fans and parents a chance to watch the games again over an extended period of time,” Moore said. “There’s a lot of work that goes into it. A lot more than I think people realize.”

“We usually switch at halftime,” he said. “By the time the game is over we have all done several different things.”

Most of the filming is done the traditional way: a roving sideline camera, end zone camera and cameras atop the press box. Other less-traditional filming is also being used. OUS Special Projects Producer Brad Bear has been using a drone to take aerial shots as well as film some of the game.

“We’ve been experimenting with it,” Bear said. “So far it’s worked out really well.”

Electronic media major Charles Blackburn said some members of the OUS film crew aren’t even students in the class.

“Many students volunteer to do it,” he said. “It’s great experience and for a lot of us, it’s fun.”

Aside from the end zone, sideline and press box cameras, students are also employed in such facets as audio, instant replay, operating the boom microphone and cable pullers.

Freshman electronic media major Chad Cartmell said post-production is finished by Monday so the games will be ready to broadcast.

The games air on The Tribune’s website, Time Warner channel 25 and Armstrong Cable channels 4 and 100. The remaining broadcast schedule is:

Making his dreams a reality

Mickey Fisher speaks to Ironton High School   His message was simple: Before he was an actor, a filmmaker or... read more