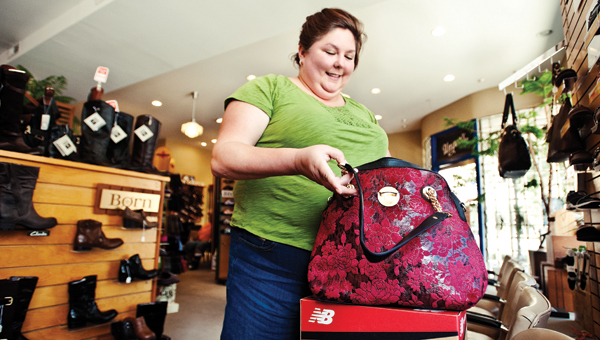 Jeanie Basham browses through a selection of purses while shopping at Unger’s Shoes.

Jeanie Basham was still trying on shoes at Unger’s an hour after receiving her $250 “Ironton Bucks” at the Ironton aLive board meeting.

“I never win anything,” Basham said. “That makes winning this even better.”

Basham was one of nearly 30 people who participated in the Great “I”Town Scavenger Hunt, which entailed select downtown Ironton merchants displaying Ironton aLive posters reflecting the colors and logos of different high schools in Lawrence County. Scavenger hunters visited the 10 participating merchants and located the Ironton aLive poster, recorded the name of the school posted there on an official scavenger hunt form. They entered the completed form in a drawing for “Ironton Bucks” that could be spent at participating businesses.

“The businesses seemed happy because 80 or 90 percent of the people who came in were nontraditional customers,” Jon Ferguson, executive director of Ironton aLive, said. “I know Iron City Hardware put the poster upstairs to drive customers to where they sell furniture. A lot of people didn’t even know they sold furniture until the scavenger hunt.”

“It was very, very good for us,” he said. “We got a lot of people in here who had never been in here before and they ranged in age from little kids to teenagers to senior citizens.”

Basham said she turned in her form at the Ironton Farmers Market and, because of her past luck, made her way home.

“I got a call from (Jon Ferguson) and he told me to come back,” she said. “In my head, when I turned in that form, I already had the money spent.”

Unger praised the efforts of Ironton aLive. He said it is getting more difficult to drive customers — especially new ones — to downtown businesses because people have become very mall-oriented.

“I think people need to realize what we have here in downtown Ironton,” Unger said. “We are lucky to have such an active downtown in such a small city.”

Ferguson said there are plans for additional scavenger hunts.

Employee, former physician also charged   Investigators in the case of a doctor accused of operating a pill mill in... read more