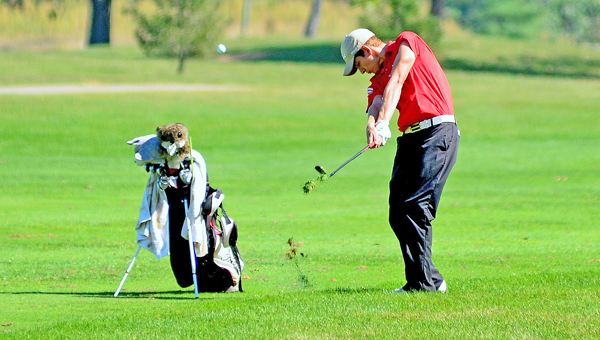 Coal Grove senior golfer Brent Morgan was the medalist Wednesday in the Division III sectional golf tournament as he led the Hornets to the team title and a berth in the district. (Kent Sanborn of Southern Ohio Sports Photos)

The Coal Grove senior fired a 74 to take medalist honors as he led the Hornets to the Division III sectional golf tournament team title.

Coal Grove shot 325 as a team to easily outdistance runner-up Portsmouth Clay who had a 369 total.

The top two teams and two individuals not on a qualifying team advance to the district tournament Monday at Pickaway Country Club in Circleville.

Besides Morgan’s low score, senior Brandon Adkins and freshman Trevor Deere both shot an 83, sophomore Chase McKnight had an 85 and sophomore Ryan Malone finished with a 97.

Adkins and Deere tied for the third best score overall behind North Adams’ Taylor Anderson who had an 81.

The St. Joseph Flyers were led by senior Bryson Adkins who shot a 95 and was 12th overall. Freshman James Carter fired a 106, senior Ben McDonald had a 144 and senior Eli Lutz carded a 155.

Jim Walker jim.walker@irontontribune.com   FRIENDSHIP — This is a case where three will get you one. The Chesapeake Panthers were... read more